Penner, Cam and the Gravel Road - Feels Like a Sunday Night 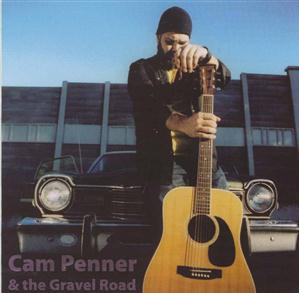 Felt Like a Sunday Night, speaks or rather sings of an evolution both sonically and personally...it feels more like a Saturday night with the crunchy electric guitar lines and "riffs" tastefully handled. The infectious tempo and swampy electric guitars of Cam Penner's song 'Rye Whiskey' announced their arrival to my senses like a train rumbling through a sleepy town. The songs flow with ease between the instantly catchy country rockers like 'Rye Whiskey' and 'Be Kind' to the slow songs like 'No Stars', a waltz reminiscent of Joe Henry with backing vocals by Victoria Williams.
-Tariq, BeatRoute

Looking at the world through a windshield. That's been Cam Penner's view for the last two years. In those two years he has toured five countries, six provinces, twelve states and performed over three hundred shows. He has opened for Chip Taylor, Richard Thompson, Slaid Cleaves, Fred Eaglesmith, Greg Trooper, Carrie Rodiguez, Blackie & the Rodeo Kings, John Prine, Glen Campbell, Lyle Lovett, and the Flatlanders. With no label or booking representation Cam has found his own way into the bars, theatres, cafes, backyards, and honkytonks across this wide land.

His last album 'Felt like a Sunday Night' has charted in Europe (Euro-Americana Charts) climbing its way to No.3. It also stayed in the top fifteen (peaking at No.3) for four months on the Freeform Americana Charts (across North America) outlasting any other artist. The song 'No Stars in the City' took third place in the 2006 International Songwriting Competition and his latest song 'Thirteen' has made its way to the finals in the 2008 competition. Other songs from Cam's repertoire 'Rye Whiskey' and 'When I Die' have been featured on compilations in both Canada and the UK. The album made it's way on many top ten lists and was given four star reviews in both North America and Europe.

Cam Penner hails from a Mennonite community in Southern Manitoba, where his parents, the town rebels, ran an illegal roadhouse and his grandfather, a bootlegger, delivered his goods to the rural community bringing much needed remedy. Growing up in small towns in both Manitoba and Saskatchewan, Penner found an appreciation for common people's stories. He left at nineteen for Chicago where he ran a soup kitchen and worked at a women shelter. These experiences ignited a passion for social justice and after moving back to Canada, Cam continued working with the homeless for the next thirteen years.