Payne, Roy - Goofy Newfie (re-issue of No Price Tags On The Doors Of Newfoundland) 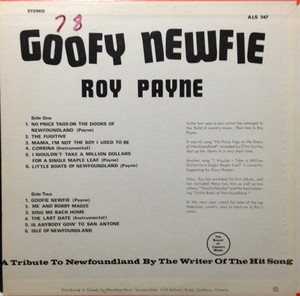 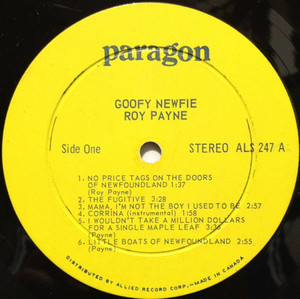 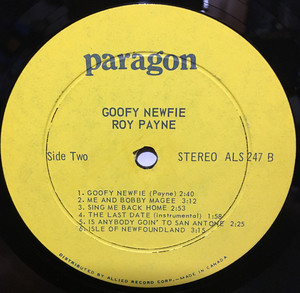 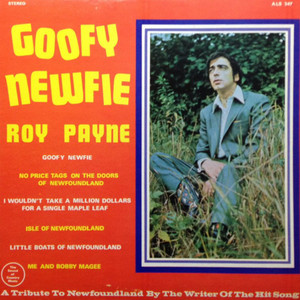 IMHO - Roy Payne
A Reflection for the Museum of Canadian Music
Snowden. December, 2010

Recently I was given a copy of a couple of Payne cds that I had not heard and gave them a listen. This is a welcome return to the sound of Roy Payne that I had lost for so long. No doubt, there are others closer to him and more fortunate than I that have managed to stay with him all along. To them I tip my hat. These new (to me) songs remind me that a great writer tells his story, the pain and the joy, the sorrows and the hopes and shows that pride in culture and heritage is a blessing. I can only hope that someday I can tell a story half as well. I strongly urge all of you to listen to Roy’s music. Ignore the sometimes repetitive ‘beat box’ sound in a few songs and really listen to the story as Roy and his friends (fine musicians all!) present them to us. Remember if you will that every word has been taken from the real life of a real man, sometimes funny yet sometimes heartbreaking.

And as Roy might say, “Keep your arse to the wind”.
-Snowden Walters
-More Roy Payne Reviews to follow in the coming weeks....

I Wouldn't Take a Million Dollars for a Single Maple Leaf:

I've seen a lot of sadness in the countries of this world,
I've seen the starving faces of a million boys and girls;
I've walked the war torn countryside and the bloody battered streets,
Where young men fought and died because they wanted to be free.

And as I watch my children playing freely with their friends,
I thank God for this country, mister, that we're living in;
There are no cries of fighting soldiers dying on our streets,
I wouldn't take a million dollars for a single Maple Leaf.

When you think you've got troubles, you just listen to the news,
And I'm sure you'll realize, my friends, your troubles they are few;
Compared to those of others in the countries of this world,
We live in a paradise, a rare and priceless pearl.

Spoken:
Yes, friends, we've got so much to be thankful for, all across this land,
From the mighty Pacific Ocean to the shores of Newfoundland;
So tonight when your children pray down on their knees,
You ask them to ask God to bless Canada and forever keep her free.