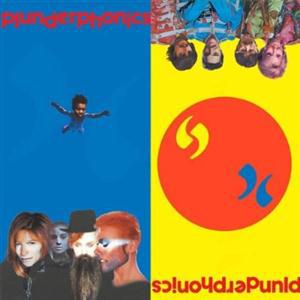 69/96 is perhaps the definitive set of John Oswald's experimental Plunderphonics, a two-disc retrospective covering most of his most famous and often brilliant work, from the entireity of the ultra rare Electrax (or Rubiyat, as Electra renamed it) EP to selections from Plexure, Grayfolded, the original (and highly illegal) Plunderphonics CD, and Discosphere.

For the uninformed, Plunderphonics is sampling taken to the next level, songs manipulated, sometimes beyond recognition and often to completely alter their meaning. Just to briefly list some of the tracks on this album would be difficult. There's Chuck Berry songs compressed down to 10 seconds or less (the Barely tracks), Dolly Parton singing a duet with a slowed-down version of herself (Pretender), the Kronos Quartet compared and contrasted with a generic heavy metal band (Mach), a mashup of the Carly Simon and Faster Pussycat renditions of "Vain" (Vane), a marathon of different singers and their renditions of the Phil Spector song "Ebb Tide" (Ebb), and many many more. It's extremely hard to describe half of these songs without making them sound like less than they are. It's popular music completely mutated into something completely above and beyond most anything pop music has to offer, and some of the tracks showcased were even ahead of their time (such as "Power," a combination of Led Zeppelin riffs and televangical ranting that could almost count as one of the first rap songs).

Augmenting the 62 tracks found in this collection is a comprehensive interview with John Oswald that gives key insight into most of the tracks on the discs: how they were made, what they were made for, the history of Plunderphonics, and much much more. Almost no stone is unturned, and some of the songs he mentions in passing that didn't make the cut for this set also serve to pique one's interest. Maybe another Plunderphonics box set will eventually see the light of day if we're lucky.

All told, this is an extremely well done and exceptionally brilliant package, and should be essential for fans of experimental music or to those who would like to know exactly what sort of possibilities sampling can hold as a medium in and of itself. I'd recommend getting this as soon as you can. While the copyright lawyers haven't made a fuss over this album yet, who knows when they might.