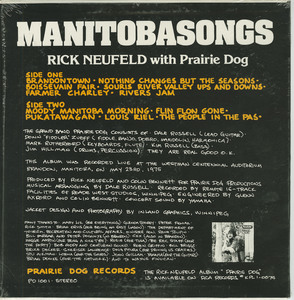 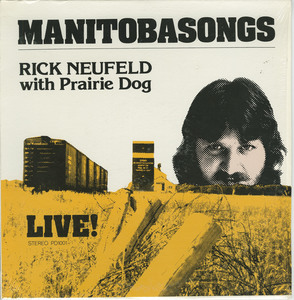 Rick Neufeld was born to a prairie farmer in Boissevain, Manitoba, near Winnipeg, Manitoba. He released his third and final album, "Manitobasongs" in 1978 on his own private label: Prairie Dog Records PD 1001. Rick Neufeld wrote the song "Moody Manitoba Morning", made famous by The Bells. Rick made an appearance on the Wild Rice album in 1972 as well as the CBC "Touch the Earth comp" in 1981. With Canadian classics like "Moody Manitoba Morning", "Louis Riel", "The People in the Pas", "Flin Flon Gone" and "Brandontown", Rick Neufeld played an important part of creating and preserving Manitoba music heritage. Too bad this was his last album....
-Robert Williston