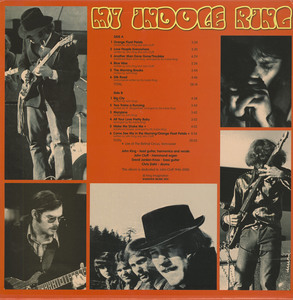 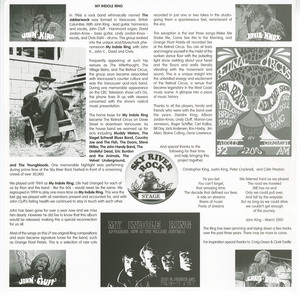 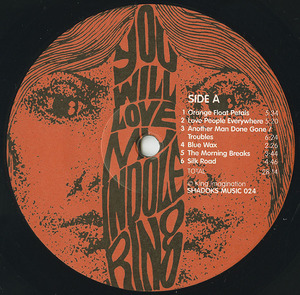 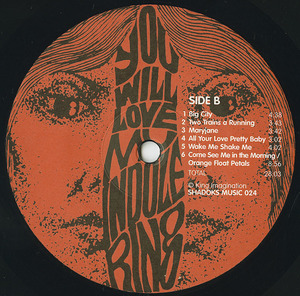 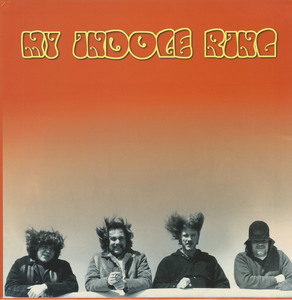 The home base for My Indole Ring was The Retinal Circus in Vancouver B.C. An album planned for Vanguard Records is now released for the first time. Acid West Coast rock with trippy guitars, sound effects and vocals with soul. With bonus tracks. In 1966 a rock band whimsically named The Jabberwock was formed in Vancouver, British Columbia. This group evolved into the unique acid/blues/rock phenomenon My Indole Ring. Most of the songs on this LP are original Ring compositions and soon became signature tunes for the band, such as Orange Float Petals. This is a selection of raw cuts recorded in just one or two takes in the studio -- giving them a spontaneous feel, reminiscent of the era. The exception is the last three songs -- 'Wake Me Shake Me', 'Come See Me in the Morning', and 'Orange Float Petals -- all recorded live at the Retinal Circus. You can sit back and imagine yourself in the midst of the sunken dance floor with the pulsating light show swirling about your head and the floors and walls literally vibrating with the movement and sound. This is a unique insight into the unbridled energy and excitement of the Retinal Circus, a venue that became legendary in the West Coast music scene. A glimpse into a piece of music history."

Excellent album from this Canadian (Vancouver) band that had nothing released at the time.
This sets the record straight and shows what a great west coast influenced band they were.
Lots of great distorted guitar and organ mixed with some deep acid touches make this an absolute winner. This band played regularly at the 'retinal circus'.