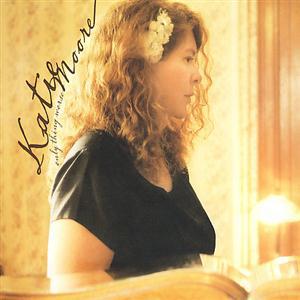 After listening to Katie Moore’s record, you’d think the curly-haired nymph roots herself in Alberta’s snowy forests, that she finds solace in Saskatchewan’s canola fields. But, of course, you’d be wrong. The folk/roots/alt-country princess actually calls Montréal her home, and it’s here where her dazzling jazz/cabaret undertones come into play, weaving themselves into her melancholic reflections of wide open spaces and ordinary happenings. Only Thing Worse is like wandering through Moore’s thoughts, right from her growing pains ("Getting Older”) and fears of losing innocent insight to her personal accounts of the everyday people who go unnoticed ("The Waiter”). There’s no doubting that Moore’s voice is one of a kind, a sort of angelic call in the stormy and emotional wilderness that is modern country music. If Nathan’s Keri Latimer was actually a woodland goddess, she’d sound just like Katie Moore.
-Amanda Ash

Montréaler Katie Moore has been called an alt-country crooner, an angel-voiced folk darling and even a seductive songstress. She says that she “just likes to sing.”

And sing she does. She cut her teeth on old-time country music at the Wheel Club and Sunday Nights at Barfly, Montréal’s acoustic country hotspots. The traditional influence seeps through on her recently completed and as-of-yet unreleased solo album, a collaboration with producer Warren Spicer (Plants and Animals, Orillia Opry, Timber!).

The debut solo recording, Only Thing Worse is a collection of mostly original songs produced by Warren C. Spicer. The album ties together all of Katie’s influences – from old-time country and bluegrass to folk and indie rock. Only Thing Worse was nominated for Quebec’s GAMIQ Awards, a MIMI (Montreal Independent Music Initiative) Award, and has held a steady place on College radio charts. The original song “Rush Enough” was nominated for SOCAN’s ECHO Songwriter Prize.