Kilt - Four in the Crib 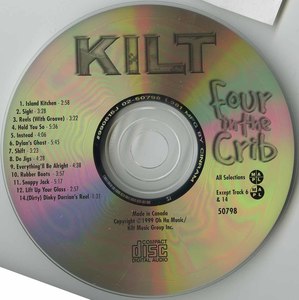 CD-Kilt-Four in the Crib CD

CD-Kilt-Four in the Crib FOLDOUT 1 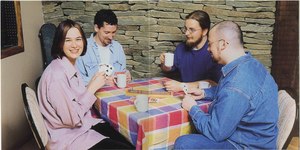 CD-Kilt-Four in the Crib FOLDOUT 2

CD-Kilt-Four in the Crib INSERT 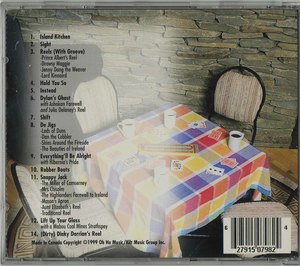 CD-Kilt-Four in the Crib JEWEL BACK 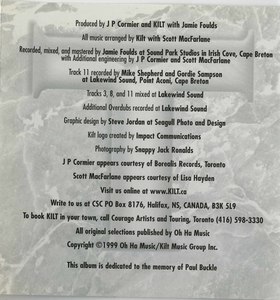 CD-Kilt-Four in the Crib PAGE 1 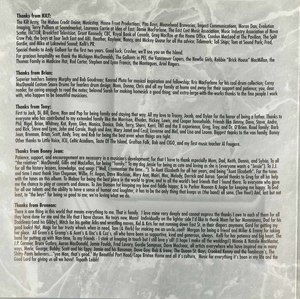 CD-Kilt-Four in the Crib PAGE 2 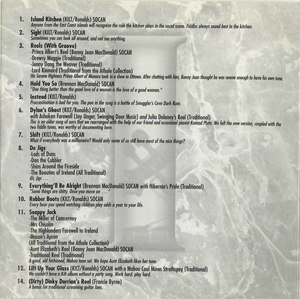 CD-Kilt-Four in the Crib PAGE 3 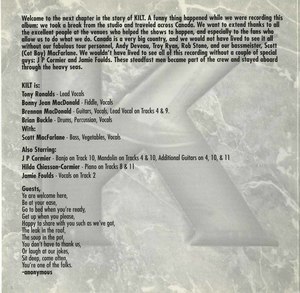 CD-Kilt-Four in the Crib PAGE 4 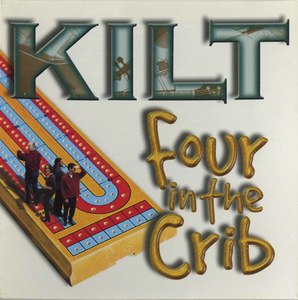 Four in the Crib

The music business is a gamble, so why not name your second album after that most Maritime game of chance, cribbage?

The members of Cape Breton's Celtic pop band Kilt are transformed into human pegs on that familiar multicoloured board on the cover of their new CD Four in the Crib. A fierce game of crib is as much a part of any kitchen party as the fiddler sawing out tunes or the strong tea brewing on the stove, and it's a unifying force within the band.

"We use crib to decide things like what songs go on the CD, if we're gonna take a gig or not," says singer Tony Ronalds, leaning back in the shade of an Economy Shoe Shop patio umbrella. "Crib sort of decides our fate; it's kind of strange.

"But it's mostly just loads of fun, it's relaxation. On tour, we have long periods of time where we're in a small enclosed space, and the only way to ward off nausea is to stare at the small numbers on cards. We like the game and it's a common bond."

"Don't tell Brennan that," she responds with a giggle.

"He's pretty good when he cheats," she says, sending a mock-accusatory glare in Ronalds' direction.

"Oh, there's nothing wrong with counting a good hand twice," he answers defensively.

The pair muse on the the connection between fiddling ability and luck at crib. Either it's the mathematics of the two skills, or just something in her Mabou blood. Either way, the whole band has been looking at a winning hand since the release of their self-titled debut. Not only have they built a strong local following, but tours of Upper Canada and a jaunt as far as the Pacific Coast have provided a string of shows where the crowds go nuts and the taps run dry.

"What the cross-country tour did for us was let us know whether this is what we really wanted to do," says Ronalds. "You can't do a 42-hour-straight drive from Calgary to Sudbury without killing each other and not think you're doing what you love.

"It really showed a sense of commitment on everybody's part, and that carried over into the studio."

Ronalds says the band did a lot of soul searching before preparing to make Four in the Crib. The self-titled album still sells well in stores and at shows, on the strength of a spirited performance and a mix of traditional medleys, original tunes and fun covers from their earliest pub band days like Dexy's Midnight Runners' Come On Eileen and a tongue-in-cheek version of Kiss's I Was Made for Lovin' You that some saw as the band's calling card.

With the second album, it was time to decide how much further the band wanted to go to develop its own identity.

"Did we want to do covers? Did we want to do our own music? Is this the one that's going to set us apart from everybody else, or do we save that one for later?" he says. "We decided to put 110 per cent into the best material we had at the moment, make demos and see how we felt about it then.

"Then we went on a five-week cross-Canada tour. That solidified things a lot more, we were a lot more comfortable performing the material live, and we were able to take it back to the studio and transmit some of that live energy into the recording."

Aside from age-old jigs and reels, the only real cover on Four in the Crib is Jay Ungar's Ashokan Farewell (best known as the theme to Ken Burns' Civil War documentary), which gets a bohdran backbeat as part of a revamped version of Dylan's Ghost from the first album. The bulk of the album is original material that shows a band comfortable with its sound and able to craft a more unique vision.

"The songs I've written are a lot more personal," Ronalds says. "I think I'm getting a better sense of how to express myself, as strange as that sounds while I'm trying to explain it. I like writing music and putting my own words in, and in the past I was worried about people sitting down and going 'Oh, THAT's what he's talking about,' but now I don't care. If it has a good melody and a good beat, the lyrics will be secondary to everybody else. Most people that listen to music won't give them a second look until the third time they listen to a disc.

"For most people, they want to know, 'Is it catchy? Does it keep my attention? Do I feel good after it's over?' "

Ronalds paints a vivid picture of a Cape Breton Saturday night on Island Kitchen and sings a loving ode to his kids on Rubber Boots, one of three songs on Four in the Crib that feature the extra texture of J.P. Cormier on banjo, mandolin and guitar. With songs like these, why bother with other artists' material?

"Not that there's anything wrong with bands that perform other people's music," counters Ronalds. "We did that, and we still do it. We do a tune by Michael Jackson, we still do the Kiss song in concert, some Spirit of the West, what have you. Whatever we feel like doing. But at this stage we felt like showcasing what we could do and create musically, and hope people respond as enthusiastically."

Of course the true test is how well the material goes over back home on the Island. MacDonald says nothing makes her more nervous than a Cape Breton show, since the audience often knows as much as, or more than, the band does about the tunes.

"They're tough critics," agrees Ronalds. "They know if you're playing half-a-step out or if you're out of tune. You can't get anything past them, they're too quick.

"The biggest show for nerves was the Granville Green (outdoor concert). It's the common ground for people from Port Hawkesbury, Port Hood and Mabou. It's close enough, it's early enough in the evening that children can attend, it's all-ages and everybody knows the music. And that show is what everybody is basing your career on for the whole year, to see if you're worth the six bucks the next time you come through town.

"And there's nothing more nerve-wracking for me than a sober crowd. There's no buffer; you have to be on and you have to be funny and talented and coordinated. You can't trip, and you've gotta know how to stepdance."

Now it's back on the road for Kilt, with more shows scheduled in Ontario and the U.S., and offers to play coming from the U.K. and Australia. It's a safe bet that wherever they travel, there will be Maritimers cheering them on (and relatives of Bonny Jean, jokes Ronalds).

"We're getting to see the world," says MacDonald, smiling. "We're getting to do what we love, and almost making a living at it."
Though you will never get to see Kilt live, clap your hands and take a turn about the dance floor to their fantastic music. You should buy their second album Four in the Crib if you ever stumble across it. If you do, the Fates will surely have smiled on you!

"Why?" you may ask. "Why should one little CD bring me such joy?" Simply because, for their brief career, Kilt was one of the best there was.

Releasing only two albums before calling it quits, they gathered fans like no other. They sang from the heart, played like there was no tomorrow and had enough talent to astonish even those who don't like Celtic music. They reminded us what it was that brought us to the style in the first place. Coming along just as many of the original groups of the Canadian Celtic revival of the 1990s were going mainstream or breaking up, to be replaced by second-rate groups riding on the popularity of the originals, Kilt stepped in, played it properly and brought us back to the fold.

Four in the Crib features 14 tracks of original and traditional music performed to perfection by the four members. The musicianship is stunning, the vocals strong and simple, the writing insightful and lyrical. All songs have been written by the group, while many of the instrumentals are traditional.

The songs cover a lot of ground, from happy party songs such as "Island Kitchen" and "Lift Up Your Glass," recorded live, to love songs like "Hold You So." "Prince Albert's Reel" was written by Bonnie Jean for Prince Albert of Monaco after he saw their show. "Dylan's Ghost" features Bonnie Jean's fantastic fiddle playing and vocals that have a haunting quality to them. "Shift" and "Everything'll Be Alright" display the talented writing and playing of all members of the group, as well as the folksy singing of Ronalds and MacDonald. The final track "(Dirty) Dinky Dorrian's Reel" is played on the electric guitar, which is a bit of a shock after all the traditional style fare. The instrumental sets are amazing. All the members are fantastically skilled and the inspired arranging contains all the energy of a live show.

Four in the Crib is a fantastic recording. It is difficult to find, but well worth the effort. If you are lucky enough to stumble across a copy, buy it! There are very few CDs I would recommend without hesitation, but this is definitely one of them. There is not a single misstep on the entire recording. It is a shame Kilt is gone, but at least they left one heck of an album!
-Stephen Cooke