Harmer, Sarah - All of Our Names 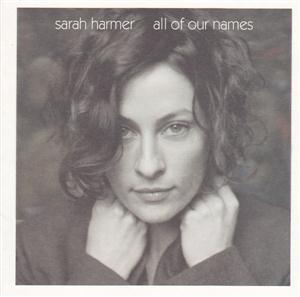 All of Our Names

It has been four long years since Sarah Harmer released her solo debut, You Were Here. It was her first release of original material after the split of Weeping Tile, following her collection of country standards with collaborator Jason Euringer, Songs For Clem. Since then, she's been filling her time with extensive touring and the construction of a home studio just outside the beautiful city of Kingston, Ontario, slowly piecing together the eleven new songs that comprise her sophomore solo release. It's hard to understand why its taken Sarah this long to give us a follow-up, though; at least a few of these songs ("Silver Road" and "Came On Lion") have been around since 2001, and the freedom of home recording should have given her the ability to record rather quickly. Then again, given that kind of freedom, some artists might begin to take their precious time, and "whenever I want" can easily become "enh, maybe tomorrow."

Perhaps she may have even succumbed to writer's block; for a songwriter, eleven new songs doesn't seem like much to show for four years work. It'd be nice to think she spent all this time carefully constructing the arrangements for the tracks, but after finally being able to hear the album, that doesn't seem to be the case, either. For the most part, All Of Our Names is a straightforward affair along the lines of YWH with a few slight leanings toward a full band atmosphere that still, even at its most decorated, doesn't take many risks. It is, however, interesting to note the amount of contribution from boyfriend and former Transistor Sound & Lighting Co. member Marty Kinack, a talented musician and songwriter in his own right; not only did he co-produce the record with Sarah, he also performs on nearly all its tracks, save "Go To Sleep."

Honestly, it's hard to know how to really take Names. It'd be lazy to call this a more "commercial" album; Harmer has never shied away from the commercial sphere, something which had irked many Weeping Tile fans with the release of YWH's lead single, "Basement Apt." Re-recorded from its original form with a studio sheen and highly pronounced drum machine that screamed "hit radio single," the song was her first real hit outside of the mild alt-rock charm of Cold Snap's title track. You Were Here was both a commercial (it went platinum in Canada and sold almost 70k in the States, rare for a relatively unknown Canadian singer-songwriter) and critical (rave reviews from countless major rags, including debut of the year honours from Time) success, cementing her as more than just another Canadian flash-in-the-pan. I've said it before, but I'll say it again: the Canadian indie scene is the Bermuda triangle of musical scenes, with many of our best talents seemingly disappearing without rhyme or reason. You Were Here seemed to reassure us that, thankfully, Sarah was around to stay.

So, while she's never shied away from an overtly commercial aspect in her music, the reason YWH balanced the personal and commercial elements so well is that the record retained her instinctual knack for great pop melodies with a highly personal context while pushing her voice, one of the best you'll hear in any contemporary genre, to the forefront. The highly personal lyrics were sharp, and even the more upbeat moments on the record -- like the bouncy "Around the Corner," "Basement Apt" and "Weakened State" -- seemed to coalesce into the record's predominantly somber, nostalgic feel. Not only did they not detour from the album's real centerpieces -- "Lodestar," "Coffee Stain," "Capsized," "Opened Window," and the title track -- they actually added a much needed variety to its heavy lyrical content.

All Of Our Names, unfortunately, doesn't have the same kind of instinctual balance of these two poles. Though both aspects are here in Harmer's trademark style, Names comes off as sporadically cold, which brings us to the record's most significant fault: its production. Digital recording has been criticized in the past for its 'cold' sound, and Harmer, admittedly still new to the process, rarely finds a way to make these home recordings sound as warm and personal as her songs often demand. Though Names takes a lyrical turn for broader, less obviously cathartic terrain than YWH, this is still hardly abstract poetry. Harmer puts a lot of herself in her music and that will probably never change, but the atmosphere in which her songs inhabit most likely will, and in this case it's like a move from a warm embrace to a distant wave.

First single "Almost" is a perfect example of a song that has been outstanding live but sounds smothered and slightly contrived in its studio form. The song has a strong enough melody to justify it being the lead single, but it lacks the certain spark that made "Weakened State" and "Basement Apt." such memorable, enduring singles. "Took It All," originally commissioned for a CBC Radio series on the seven deadly sins (as you can probably guess, Harmer tackled the always favorite "greed"), follows in a similar vein, masking a decent melody in cold bass-and-drum centered verses and a melodramatic chorus -- both devoid of her usual lyrical flair, opting instead for banal ruminations on materialism and almost comical one-liners like "these hands are holding a kite of worry." Even worse, "New Enemy" has an overbearingly slick, pre-fab feel to it, especially its introductory riff, that takes the slight problems of "Almost" and "Took It All" to an extreme; whereas the former two are still enjoyable, "Enemy" is the record's only completely expendable cut.

Don't get me wrong, it's not all disappointment, of course. While the aforementioned three tracks certainly aren't the most promising yet, there's enough great material here to make this a worthwhile, albeit flawed, release. "Pendulums," though a tad less thrilling than its extended live version, opens Names with an infectious mid-tempo swagger. "Silver Road," re-recorded from its Men With Brooms version with a new bridge, and "Things to Forget," despite its terrible MIDI synth line (what is this, Your Blues?) follow in a similar cast, their production at least approaching a warm, inviting atmosphere. Then there's "Came On Lion," a live favorite for quite some time, the gorgeous "Tether," "Greeting Card Aisle,"--each stands amongst her best to date.

But the real centerpiece here is the epic "Dandelions In Bullet Holes" -- for all intents and purposes, this album's "Lodestar" (hell, they even share a melody). Whereas "New Enemy" has an off-puttingly cold aura disarming it, "Dandelions" is warmly draped with with only acoustic guitar, understated percussion, cello, and flourishes of organ. Lyrically, it follows in more of an optimistic tone than we're used to, but it's the most pleasant surprise on the record; like the best of her work, Harmer delivers her fierce personal conviction in a range and timbre that, even without devastating lyrics backing her (in this case, they carry an idealistic, anti-war sentiment), can be emotionally draining. It takes little more than a single listen of this track to see why I maintain that Harmer's voice is one of the most affecting in contemporary pop/folk.

If, after reading the body of this review, you get the feeling like I've had a hard time figuring out exactly where I stand on this record, you're right. The crux of what makes Harmer such an affecting and promising artist is very much apparent here, and roughly half of these songs live up to hefty expectations. But overall it feels like something is absent, something that had made YWH feel timeless. The production is certainly part of the problem, but can't bear the entirety of the blame; maybe the lengthy recording process meant these songs were just around too long and open to far too many hours of tweaking. In the end, All Of Our Names has the feel of an album recorded and released quickly in one year, not four. This is a good album, no question, but I guess I tend to feel disappointed when an artist's remarkable talent clearly isn't being fully realized.
-Scott Reid