Gallant, Lennie - When We Get There 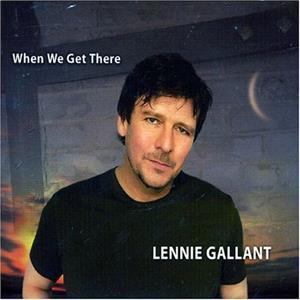 A native of Prince Edward Island, Lennie Gallant received his first guitar for Christmas when he was 13. After performing in a variety of rock and Celtic folk bands in his teenage years, Gallant formed Speed The Plow, a band that was a mixture of folk and rock in the vein of Neil Young and Bob Dylan. He also performed at a variety of folk festivals and also wrote music for film and theatre. In 1988, he released his debut album Breakwater. The album received an East Coast Music Award nomination. In 1991, he released Believing In Better. More East Coast Music Award nominations were earned, including one for Male Artist of the Year. Juno Award nominations were also given. In 1994, Gallant released Open Window, a mix of folk, pop, Celtic and rock music. He also performed throughout North America, the Middle East and Latin America. In 1997, the singer/songwriter released Lifeline. Describing his sound as "neo-Canuck", he performed at the Millenium New Years Eve concert that was a global broadcast. In 2002, he released Lennie Gallant Live, his first live album. Nominated 11 times for East Coast Music Awards, Gallant says he considers himself a Canadian singer/songwriter. "Like many Canadian songwriters, my music crosses boundaries and encompasses my musical history, which includes folk, rock, Celtic and a touch of Cajun and country." In 2002, he returned to the studio to record his first Francophone album, La Vent Boheme (The Gypsy Wind). He has shared the stage with Ry Cooder, Ron Sexsmith and Roger Hodgson among others.