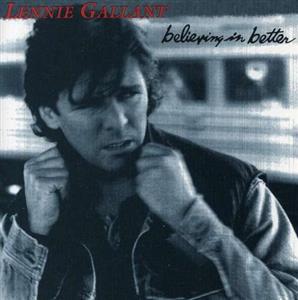 Contemporary singer-songwriter, Lennie Gallant delivers emotion that reaches down to the very soul of this audience, moving effortlessly through stirring narratives, comic observations, and hard driving rhythms. His writing is real, authentic, poetic lyricism that deals with life’s struggles, heartache, and dreams.

Lennie's music has taken him to all corners of the world – from Canada’s east to west coasts to the prestigious Kerrville, Texas Folk Festival to various tours in Europe. His passion for intensive life experiences is reflected in the dramatic scenarios of his songs.

Lennie is equally at home with on stage with symphonies, rock bands, and in acoustic settings. He appears regularly on radio and television - his award winning videos have been in heavy rotation on Much More Music, Much Music and CMT. His video for "Meet Me At The Oasis" charted for 19 weeks on "Much." His sold out Millennium New Years Eve concerts were beamed to more than 2.5 billion people in 60 countries by Newsworld's worldwide coverage.

“Lennie was fabulous; a great hit with the audience, even though they were there not for a show but for an industry event. He had them clapping and singing along, and had an enthusiastic line-up for signings afterwards. He was exceptionally professional in his performance and in every way, and a pleasure for this association to host.”
Carolyn Sutherland
Manager, Special Events, Association of Consulting Engineers of Canada

"Lennie was great. A real pro and a pleasure to work with."
Gary Quadros, Phaneuf Productions Inc.

"A powerhouse of a show"
The Halifax Herald

"Gallant nails it, then he nails the audience"
The Performing Songwriter

"Gallant had the whistling crowd demanding more"
The Whitehorse Star

"A class act all around"
Impact Magazine

"mesmerizing and evocative"
The Globe and Mail

"Our northern neighbor has given us some of the best songwriters living today. You can add Lennie Gallant to the list."
The Performing Songwriter

Quotes about his recent CD, When We Get There

"This is Lennie Gallant's strongest and most consistent recording to date."
Dirty Linen Magazine

"The wait for a new English studio album by Lennie Gallant ends sweetly...Gallant's songwriting may be stronger than ever!"
The Coast

"When We Get There is a superior piece of work in which one good song follows another from beginning to end."
The Guardian

"The kind of craftsmanship and imagination that applies to only a handful of Canada's top singer/songwriters such as Bruce Cockburn, Gordon Lightfoot and Sarah MacLachlan."
Ron Foley Macdonald

"Compelling melodies and acoustic arrangements that focus the listener's attention on some of the finest narrative lyrics this prolific songsmith has written...a poet whose pleasant tenor belies the rocker we've heard in many earlier recordings. "This set of radio friendly, folk influenced pop songs brings Chris Isaak to mind."
Toronto Star

"He delivers the goods. No surprise here - the man is very good at what he does."
Penguin Eggs Magazine
"This is a song that, in the hands of one of today's 'superstars', would become a monster hit record and go way beyond being a Christmas song." (The Innkeeper)
Country Music news

Lifeline
Male Artist of the Year