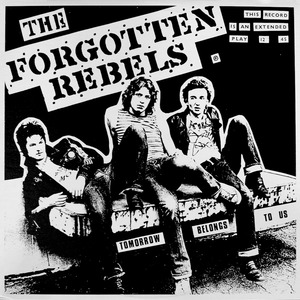 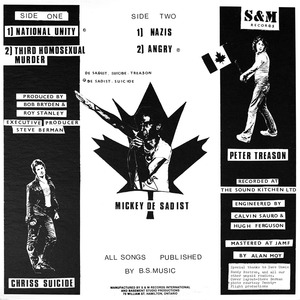 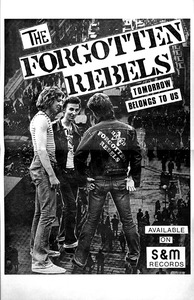 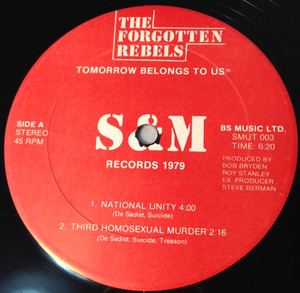 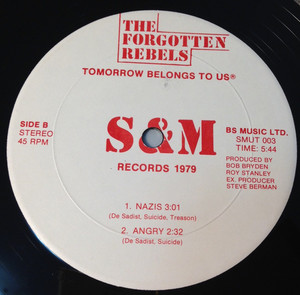 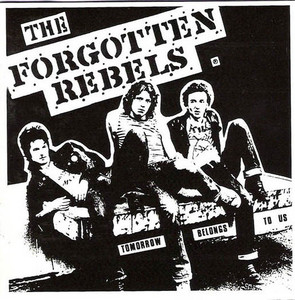 Derivative but entertaining, Ontario's Forgotten Rebels delivered trashy glam-punk with the snottiness of the Sex Pistols, the dopey humor of the Ramones, and the big hooks of Gary Glitter and T. Rex. The group got its start with a 1978 demo entitled Burning the Flag, which was followed with an independent EP, Tomorrow Belongs to Us (both were later collected on a 1997 reissue titled after the latter). The original lineup featured vocalist Mickey DeSadist (b. Mickey Gerlecki), guitarist Tony Madelina, drummer Angela Madelina, and bassist Carl "Chris Suicide" Johnson, and like most of the Forgotten Rebels' lineups, it was short-lived, as new drummer Pete "Treason" Latimer joined in between recordings and left just as quickly.

For the band's 1980 debut album, In Love With the System , a new lineup coalesced around DeSadist: guitarist Alan "Al McCombo" Smolak, bassist Chris "Pogo Au Go Go" Houston, and drummer Larry Electrician. In Love sported a harder-edged punk sound than either previous or subsequent records; following its release, Houston left to form a backing band called the Sex Machine, with whom he recorded an album in 1986. For that matter, the remainder of the band left as well, leaving DeSadist to recruit an all-new lineup of Mike "Taster" Mirabella (guitar), John Welton (bass), and Robert Allan (drums). This unit recorded the glammed-up This Ain't Hollywood... (1983), which featured covers of "Save the Last Dance for Me," "Eve of Destruction," and Gary Glitter's "Hello Hello (I'm Back Again)," plus one of the group's signature songs, "Surfin' on Heroin." 1985's The Pride and the Disgrace found DeSadist and Mirabella matched with a new rhythm section of bassist Mike "Spike" Lumen and drummer Dave McGhire. 1988's Surfin' on Heroin was mostly a collection of newly recorded versions of previously released songs, with Mike Szykowny temporarily replacing Lumen. Lumen was back in the fold for 1989's Forgotten Rebels (also known as Untitled ), which also featured McGhire, new guitarist Jeffrey Dee Campbell, and an inexplicable new spelling for DeSadest's last name.

A long hiatus ensued, but the Rebels regrouped in 1994 with a surprisingly similar lineup -- DeSadest, Campbell, McGhire, and bassist Chaz Butcher -- and a new LP, Criminal Zero . In addition to the Tomorrow Belongs to Us compilation, 1997 also saw the release of Executive Outcomes , which welded early demos onto a 1990 live perfomance. Butcher soon left the group in favor of Steve Mahon.
Steve Huey, All-Music Guide

Additional Information:
- 1st Pressing 2000 copies, 2nd Pressing 1000 copies
- The Catherine St. address on the first pressing was Mickey's apartment at the time. The address was changed on the 2nd pressing because "The guy with the hair fell asleep and burned the place down – just before Mickey was going to get tenants insurance. That was a bit tragic for Mickey." - Steve Burman
- On the 2nd pressing of album, the middle bottom of the back of the sleeve states "Manufactured By S&M Records International and Basement Studio Productions 73 William St. Hamilton, Ontario". This was the address of Basement Studios. Basement Studios was the same place that part of Executive Outcomes was recorded.
- The 2nd pressing included a poster of the band.
- S&M Records refers to Steve (Berman) and Mike (Grelecki) Records.
- December 1978: Bob Bryden was approached by Mickey De Sadist and Chris Suicide to mix Forgotten Rebels EP 'Tomorrow Belongs To Us' (S&M Records). Begin mixing same month (Dec 11) at Sound Kitchen, Toronto (Source: Bob Bryden's website)
- April 1979: 'Tomorrow Belongs to Us' - Forgotten Rebels EP is released. In a brilliant PR stroke, Rebel's commandos manage to get a copy of the EP into Prime Minister Trudeau's hands at a rally and photograph him perusing the highly volatile release. (Source: Bob Bryden's website)
- Spine of Album Sleeve: SMUT 003 THE FORGOTTEN REBELS Tomorrow Belongs To Us S&M Records Litho in Canada
- The name of the album is a 'response' to a Teenage Heads’ motto, “I’ll Take Today, You Take Tomorrow”
- The re-release CD of the album by Yan Houst was the original band produced mix