In a world and time where absolute free sex was everywhere, drunk driving was normal, sponsorship was a sellout to the system, mushrooms were legal, political correctness wasn't even a thought and sex, music and fashion were one and the same...The Forgotten Rebels were born.

The punk rock movement had just started and the young teens of the day were drawn to the chaos,rawness and truth of this new mutation. In particular a raged group of motley youth from Hamilton Canada in 1977 were to bring a decidedly more offensive level, more in your face, and more obscene than anyone had ever dared, and the Rebels spend the next 20 plus years influencing many new bands and making a mark that was there's alone. Although it was done as a "let's just get any reaction" statement, the tongue n cheek humor of the Rebels was to be there notoriety and there Achilles heel forever more.

When the band started " to get free beer and chicks " a decision was made to laugh and poke fun at everything, everyone, everywhere, leaving none left out of the joke, even themselve's . Singer and founding member and frontman extrodinair Mickey De Sadist recalls "The band's we most admired were, Bowie, T-Rex, Gary Glitter,and the Sweet", but being new to musical instruments the best we could pull off was a bad out of key version so we decided to write our own songs with less chords.

In the summer of 77 they released a cassette tape entitled "Burn the flag" and soon followed with the infamous 4 song EP"Tomorrow belongs to us" which garnered the Rebels attention and some critical acclaim, history would be much kinder as this EP now commands around $150-200 and is regarded around the world as one of the finest Punkrock records ever made. It was reissued on CD in 1998 and one writer wrote "This cd is possibly one of the longest awaited reissues in punk rock history".

The first full length album was released in 1979 entitled "In love with the system" and solidified there position forever in the "Punk hole of fame" Many tracks were instant college and party classics and still are to this day.The title track and three less innocent tracks "Bomb the Boats, Fuck me Dead and Elvis is Dead" were to take the band on a ride that would last till this day as founding members of punk rock. In 1981 a new album was released "This ain't Hollywood" and a drummer switch to Dave Mcghire who was the bands sound man and roadie before joining. He will remain as the rebels bones man till present day. This album also contained the Rebels signature party anthem song "Surfin on Heroin" which is without a doubt one of the best known punk party songs in history.

After constant touring in the early 80's the Rebels returned to the studio in 1985 to record a 4 song ep entitled "Boys will be boys" and there first filmed video for the above titled song. Soon after "1986" released a new full album entitled "The Pride and the Disgrace" due to massive alcohol and drug abuse,the band recall's(it should have been called the Disgrace!) but it does stand as an good example of what excess will lead to.

In 1988 the Rebels signed a new American record deal with Restless/ Enigma/ Capitol records. In 1989 after releasing the new album "Surfin on Heroin" and after a show in Tiajuana mexico longtime guitar player mike "taster" mirabella quit the band. After returning to the Rebels home base Hamilton Canada, they soon regrouped with long time friend Jeff Campbell on guitar from the "Throbs". In 1990 the band released a "self titled" album on the world that would be forever called "untitled" because of an "here we go again" alcohol induced screw up.

After 3 more years of touring the Rebels returned to the studio in 1994 to record album number 6 entitled "Criminal zero"after filming 2 video's for the songs "the Hammer" and "Buried alive" the Rebels in 1995 went out on tour again with another underground classic "Autosuck" under there belt. Since fall 1997 the Rebels have been writing new songs and Selling out Venues in North America and Europe. The Rebels decided to go back into the studio and record an ALL NEW CD for OPM / EMI records entitled "Nobody's Hero's". World wide release date is Sept 5th 2000, tours are set for Europe "October", Canada "november" and the US in January.

The Forgotten Rebels have toured/played with such bands as: the Clash, the Ramones, sir Iggy Pop, the Cramps, Ian Hunter & Mick Ronson and many many others.

Tomorrow Belongs to Us

Boys Will Be Boys 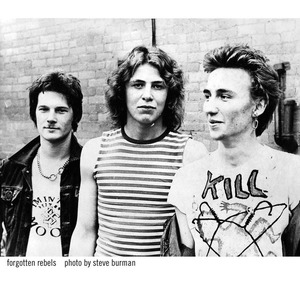