Diodes - Tired of Waking Up Tired: The Best of the Diodes 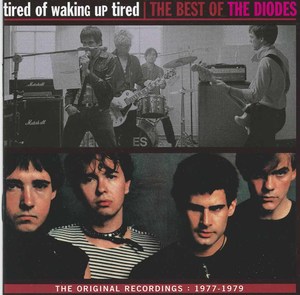 1998 marked the 20th Anniversary of "Tired Of Waking Up Tired", the quintessential new wave pop classic. And what better way to celebrate than to make available for the first time on CD, the complete Columbia/Epic recordings by The Diodes, one of the great original punk pop bands, and a part of the Sony Music Canadian rock legacy.

When punk first broke in 1976, The Diodes (Paul Robinson, John Catto, Ian Mackay, John Hamilton and, later, Michael Lengyell) were at the front lines of a wave that included Generation X, The Damned, Sex Pistols, Talking Heads and countless other pioneers of alternative rock. By the time they signed to CBS Records in August, 1977 (becoming the first punk/new wave band inked to a Canadian major), The Diodes had already run Canada's first punk club (the legendary Crash 'n' Burn Club), played CBGB's in New York, and been written up in Melody Maker, Creem, Bilboard and The Globe and Mail as a band to watch. The debut self-titled Diodes lp came out in October, 77; one of the first new wave albums of the era.

The single, "Red Rubber Ball", a revved up version of The Cyrkle's 60s hit (written by Paul Simon), was the first new wave single on the Canadian charts (peaking at a modest #96 on the RPM singles chart), and reached #5 on the U.S. Record Week "New wave Top 20" chart in Feb, 1978. In November, 77, the Diodes headlined the notorious Max's Kansas City in New York with none other than Wendy O. Williams introducing them on stage. The Diodes lp was released in France, Sweden, Germany, Holland, and was a top selling CBS import in the USA and the UK.

During a 1978 US tour, the group introduces a new song "Tired Of Waking Up Tired" . The reaction is so phenomenal that the single is rush-released and rockets onto US radio (WTBS/Boston #12; KSJO/San Jose #4; KROQ, WBCN, etc) as an import only item! In the UK, "Tired" makes #36 on the Sounds magazine Best of 78 chart, while the NME hails it as one of "The Singles That Got Away". Prestigious rock critics like Jon Savage, Vivien Goldman, Ken Barnes and Greg Shaw call it a classic track. The Diodes also become the first punk group to get an El Mocambo live broadcast on CHUM FM in March, 1978, (the first anniversary of the Rolling Stones appearance there a year earlier).

The Diodes were an active force on the Canadian scene, touring with the likes of U2, Ultravox, Split Enz, etc, until 1981 when the original group disbanded and singer Paul Robinson and guitarist John Catto moved to England, where they still reside. The Diodes were influential not only in Canada (Shadowy Men On A Shadowy Planet and Change Of Heart released a 7" tribute single) but worldwide (Bob Mould once bought a box of their first lp to give out to people). "Tired" was also the only track by a Canadian band featured on the Rhino Records DIY series of punk/pop compilations. Interest in The Diodes has been steady via heritage airplay on Modern Rock radio, the cult movie Hard Core Logo (the lead characters sing an acoustic "Tired"), vintage video play on Much Music, the Internet, and "Tired Of Waking Up Tired" being voted #17 on the Top 50 Canadian Singles Of All Time (Chart magazine)