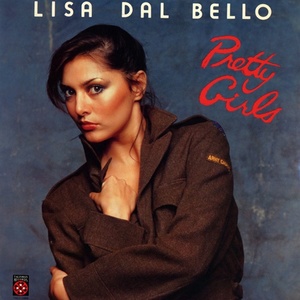 In 1959 Lisa Dal Bello was born in Weston, Ontario, a suburb of Toronto. At age 11, she taught herself to play the guitar and started writing her own songs. And she also started to perform at the Mariposa Folk Festival and the Fiddlers’ Green club in Toronto. The first song she wrote was a protest song called “Oh, Why?” In 1971 she got a summer job touring as part of a 35-member musical troupe sponsored by the Ontario Provincial Government. However, as she was only 13, she had to fib about her age to get hired for Summer Sounds ’71. The following year Lisa Dal Bello met singer-songwriter Ian Thomas at an audition. This led to her recording three songs she’d written for the CBC. The other person at the audition, Jack Budgell got Lisa connected with jingle producer Tommy Ambrose. She also was introduced to numerous producers and got to be a back-up singer on studio recording sessions.

In the mid-70s she got to appear on the country-folk variety show on CBC called Sinagalong Jubilee. She joined the group Liberation and they sang on the CBC variety show Music Machine. From 1975-77 she was a regular back-up session singer on the CTVs The Bobby Vinton Show. Lisa Dal Bello also was busy backing other recording artists in the recording studio and doing commercial jingles for Molson Canadian beer and Wonder Bra. And in 1975 she signed a record deal with MCA Records in America. In 1977 she released her self-titled debut album. At the end of the year Lisa Dal Bello won the Juno Award for Most Promising Female Vocalist of the Year.

In 1978 she released her second studio album, Pretty Girls, that included the single release of the title track.

Pretty Girls by Lisa Dal Bello
“Pretty Girls” was written by Lisa Dal Bello. The song concerns the life of a guy who works in a store at a health and beauty aid counter. His customers are all women who want to look pretty. Lisa Dal Bello compares him to pop singers, something he will never be. But he spends his time luxuriating in the company of pretty girls. So, do guys who work in cosmetics department counters, or sell health aids to keep women slim and attractive get to flirt, or get dates on the side? No doubt it likely happens, and maybe more often if the men behind the health and beauty aid counter have sex appeal.

“Pretty Girls” climbed to #17 in Vancouver (BC). In the fall of 1979 Melissa Manchester covered “Pretty Girls” and it became a minor hit in the USA, peaking at #39 on the Billboard Hot 100.

In 1980 she released her third album called Drastic Measures. It included the debut single “Never Get To Heaven” which made the Top 20 on CHUM in Toronto. She co-wrote the song with Bryan Adams. The album was nominated for a Juno Award for Female Vocalist of the Year. The award went to Anne Murray. In 1983 Lisa Dal Bello was nominated for the same award and lost out again to Anne Murray, who won the honor for the fourth time in a row. She rebranded herself as Dalbello and released her fourth studio album titled whomanfoursays (pronounced “human forces”). Dalbello was nominated again in 1984 and 1985 in the same Juno category. In ’84 she lost out to Carole Pope, and in 1985 the Female Vocalist of the Year went to Luba. She also was nominated in 1984 for Producer of the Year, losing out to David Foster.

In 1987 her next album, She, was released. It contained her single “Tango” which was her biggest hit in Canada. She toured in Europe and in 1990 relocated to Los Angeles. In 1993 she toured with Heart. In 1996 she released another studio album titled Whore. Nearly two decades later she released a live album in 2015.

Over the years Lisa Dal Bello (aka Dalbello) has written songs recorded by Dr. Hook, Nena, Heart, Patti LaBelle and Julian Lennon. She’s written and sung jingles for Cheer detergent, Ford of Canada and The Keg. She also sang the theme song for Degrassi: The Next Generation. She also has written several songs for the late 80s film 9 1/2 Weeks. Dalbello also starred in a feature film in 1982 called Melanie. Her c0-stars in the film about a child custody battle included Burton Cummings, Paul Sorvino and Don Johnson.
-Ray McGinnis, October 12, 2019