Clumsy Lovers - After the Flood 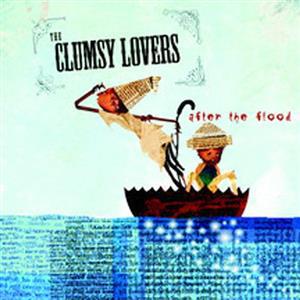 Would you expect a round of fingerpicking mayhem falling somewhere on the continental divide between Celtic and bluegrass to unfold over the rhythm from the Clash's "Should I Stay or Should I Go," only to shift fluidly into a round of traditional-ish reels that echo the Charlie Daniels Band's moment in the sun? Well, would you? Welcome to the Clumsy Lovers' world, which begins somewhere west of Ontario and encompasses the lush lands of pop, rock, and belly laughter, not to mention the rousing traditions, instrumentation, and playing of the aforementioned disciplines. Road dogs by trade, these guys have been around for years. In fact, they were probably playing a nearby hall while you were wrapped up and struggling with your Tivo's head-up menu. They've also self-released plenty of material. Still, despite all of that, After the Flood is the Clumsy Lovers' first official release, with a producer (John Webster) and on a record label (Nettwerk) and everything. It's a pretty robust ride. Banjos, mandolin, fiddle, plenty of two-steppin' rhythm -- it's all here, guided by the everyman vocals and earthy lyrics of Trevor Rogers. "Everything's Okay" finds him almost rapping the verses before dropping a Cracker-ish chorus, while "Mercy" is a heartening, poppy, folksy singalong with fabulous fiddle work (and backing vocals) from Andrea Lewis. The similarly rousing "Spare in the Trunk" suggests Poi Dog Pondering, while the traditionals "Highland Skip" and "Waterbound" are each given a fun Clumsy Lovers spin. This energetic racket gets After the Flood moving at quite a clip, but Rogers does offer a breather with the title track, which strikes a gentle note of warning over a mandolin's lilt. Throw in a late-album instrumental that seems to cross klezmer with country & western -- or something like that -- and the Clumsy Lovers can pretty much guarantee the listener a grand old time. After the Flood is a barn dance converted to ones and zeroes.
-Johnny Loftus