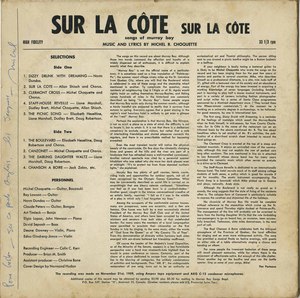 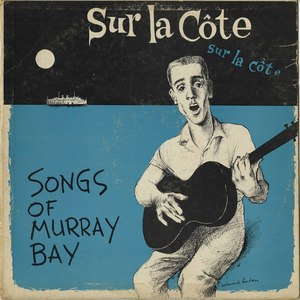 Here is an amazing album, a privately pressed recording of folk songs written about Pointe-au-pic, formerly referred to as Murray Bay, Quebec with the remarkable cover art by famous Quebec artist Norman Hudon. Michel R. Choquette, French-Canadian spontaneous humorist/satirist and folk singer was born in 1938 and toured around Canada at coffee houses and the like reciting beat poetry and playing his own unique compositions. A Canadian icon for sure. Read the extensive back cover notes for more info.

"Down by the riverside on the south-western approach to La Malbaie, Pointe-au-Pic owes its name to a point dominated by a mountain (pic). Over two hundred years ago, North-America’s high society flocked to this vacation destination then referred to as Murray Bay. This designation dates back to the War of the Conquest and a time when La Malbaie Seigniory was split in two, with Rivière Malbaie marking the respective halves. The portion to the east of the river was hence named Mount Murray, whereas the western section was called Murray Bay."

This is the first album added to the new collection of Norman Hudon cover art.