Buddy Wasisname & the Other Fellers - The Miracle Cure! 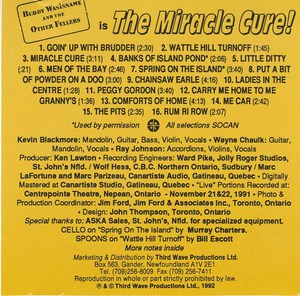 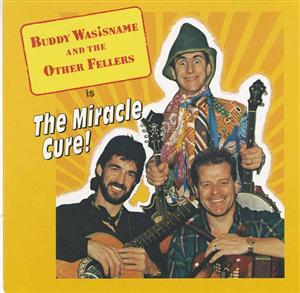 Buddy Wasisname and the Other Fellers, Canada's most famous, longest-running, most prolific and funniest traditional comedy trio are making their entire catalogue available here for digital download. Look for more albums posted in the coming weeks. This is their fourth album.

Miracle Cure - this is a very spiritual song for people who, having searched, can't find happiness!
Men of the Bay - Previously titled "Bloody Bay Men" for men from my area, but townies misinterpreted it.
Spring on the Island - Chris Lorne Elliott, whom I worked with in a duo called "Free Beer" is a brilliant song-writer as well as comedian
Me Car - Deeply evocative of the wonderful drive from Toronto to Nfld., especially at times when the automobile presents less than perfect service.
Rum Ri Row - We, the trio, are noted for bringing many old classic traditional folk songs to new audiences. This one is different only that we wrote it a month ago.

Chainsaw Earle - Earle took since 1984 to come to life. It was a struggle, but you can't kill Earle, he'll be back.
The Pits - Camping in gravel pits is a Newfoundland phenomenon and so we celebrate it with this song.
Little Ditty - I invented this for my sleepy son one night and it made him chuckle.
Going Up With Brudder - I asked a Newfoundlander what it was like mining in Northern Alberta and this comment inspired the song "You eats, sleeps and rolls your smokes and does it all again".
Comforts of Home - I dedicate this to people who have left home and can only return again through memories.

Ladies in the Centre - I first heard this at the old school in Job's Cove
Carry Me Home to Me Granny's - I've heard many accordion players do this tune and it seems to be very popular along the North Shore of Conception Bay.
Wattle Hill Turnoff - It's based on two hornpipes/reels, "Maid Behind the Bar" and "Johnny On the Turnpike" and it's title is taken from the road to my home in Job's Cove, Nfld.
Banks of Island Pond - It's written about the late Edith Johnson of Job's Cove, her life and work following the death of her husband, daughter and grandson.
Peggy Gordon - I learned this song in Nova Scotia. I first heard it at the Nfld. Club in Halifax and around Cape Breton.
Put a Bit of Powder on a Doo - My father would perform this a cappella (without accompaniment) at concerts and socials and I was fortunate to have him record it on one of my previous albums (A Breath of Nfld.).