Buddy Wasisname & the Other Fellers

Buddy Wasisname and the Other Fellers is the name of a musical trio comprised of Kevin Blackmore (“Buddy Wasisname”), Wayne Chaulk and Ray Johnson (“The Other Fellers”). Each member is complementary in their respective musical and comedic abilities, and their recordings feature Wayne Chaulk on bass or guitar, Ray Johnson on accordion or fiddle, and Kevin Blackmore on mandolin, fiddle and any number of improvised percussion instruments including Tupperware lids and garbage bags. All three sing and write songs; however, Johnson often arranges traditional accordion numbers for the band to perform.

All three musicians are Newfoundlanders, and their musical style strongly reflects this fact. The group specializes in Newfoundland and folk music, as well as performing comedic skits and standup routines. Their most popular recordings range from serious reflections on Newfoundland culture (such as “Sarah” and “Saltwater Joys”), to light-hearted tales that can border on the ridiculous (such as “Is You ‘Appy?” and “Chainsaw Earle”). Buddy Wasisname and the Other Fellers have been a prolific group for over 20 years, producing a total of seventeen albums, and still maintain an active touring schedule throughout the Atlantic provinces, and other select Canadian cities.

Buddy Wasisname and the Other Fellers were formed in Newfoundland, Canada in the early 1980s. Two of the three group members were school teachers prior to forming their group. Their first album, “Makin’ For the Harbour” was released in 1986. The album relied heavily on Newfoundland standards and Blackmore’s comedy numbers; Chaulk made one significant contribution with “Yesterday’s Fishermen”. “Gotta Get Me Moose B’y” would become their early career signature tune, and remains one of their more popular songs today. Next on the roster was “Nods’N’Winks”, a decidedly non-descript album mostly notable for Johnson’s “My Old Wooden Shack”. It is, however, at this point in the group’s history that their popularity began to rise.

The group’s third album, “Flatout”, was released in 1990, and marks the point when the group’s popularity soared. The album contains two of their most popular songs. One, “Sarah”, was an a capella tune Johnson learned from his adoptive father Johnny. The other, “Saltwater Joys”, is the pinnacle of Chaulk’s writing, and remains one of their most requested concert songs to this day. After “Flatout” came the smash success of “The Miracle Cure”, which is their biggest album to date. The album contains their most popular humorous song in “Chainsaw Earle”; two consistently popular Chaulk songs in “Goin’ Up with Brudder” and “The Pits”; and several popular Johnson traditionals including “Put A Bit of Powder On A Doo” and “Peggy Gordon”.

After the success of “The Miracle Cure”, the group put out “100% Pure”, another popular album (though not as hugely successful as their previous). Possibly the album’s most popular song is “Song for Newfoundland”, an a capella Chaulk anthem that has been covered often by many Newfoundland vocal groups. Also, the album contains what is probably their most popular song not written by one of the three members of the group: “By The Glow Of The Kerosene Light”, written by Wince Coles, which featured additional players in the form of cello, harp and piano, an arrangement not often seen in the group’s catalogue. The album holds the first track from Blackmore’s legendary “454” series, called “The Vette”. Succeeding “100% Pure” was “Salt Beef Junkie”, the album which deviates from their original style most. The opening track features a full rock backing band in addition to Chaulk’s guitar and Johnson’s accordion; “He’s A Part Of Me” features the same backing trio as “Kerosene Light”; and many of the tracks feature George Morgan’s drum machines. The album’s writing, however, does not sound drastically different from their original songs.

Makin' For the Harbour

Makin' For the Harbour 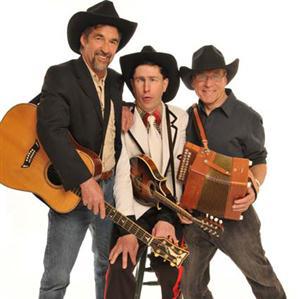 Buddy Wasisname & the Other Fellers