Buckna, Pat - Roll Me a Dream… 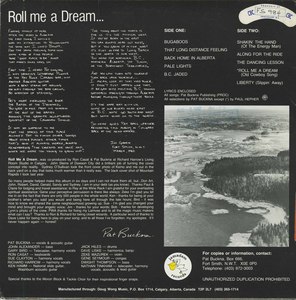 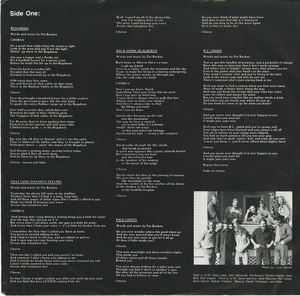 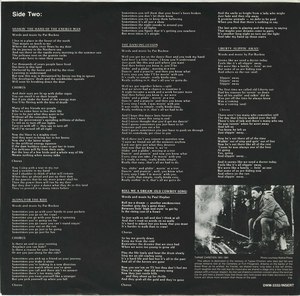 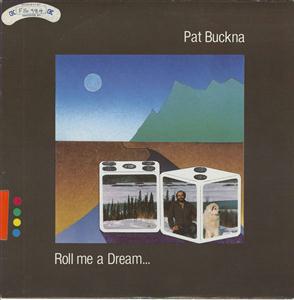 In 1975, I quit my job at the fertilizer plant, sold my house in High River, Alberta and moved my family, 6 cats, and two dogs across the mountains to Aldergrove, BC. A few weeks before, while playing music in Calgary, I'd met Paul Hepher - who wrote the title song on the album - and invited him to join us in BC. Paul accepted, and stayed for several months until the greyness drove him back to sunny Alberta. Five years later, my marriage ended and I spent the next year travelling around Western Canada - writing songs and performing in bars and lounges.

In July of 1980 - one week after the 1st Folk on the Rocks Festival at Long Beach in Yellowknife - I drove to Fort Smith to check out the whooping cranes and buffalo, loved it, moved there. I got a job as a reporter / photographer for the local newspaper - the slave River Journal. A few months later (mostly because I couldn't stand the lack of live music in the town) I organized some concerts at the High School. Over the next few years I brought Connie Kaldor, Sneezy Waters, Ferron, Diamond Joe White and Ken Hamm to town.

In June '81, I was invited to perform on the Main Stage at Folk on the Rocks and debuted many new original songs.

In the spring of 1982, I flew several musical friends, including my old conga player and friend, Gene Seymour - whom I'd convinced to move to Fort Smith the year before), John Alexander (from Yellowknife), Natham Tinkham, and Zeke Mazurek (fiddler with Sneezy Waters and Stringband) to Calgary to record the album. We were joined there by Dave Liske on harmonica, Sue Clayton on vocals, Ron Casat on keyboards, Ken Hamm on dobro and guitar, Dwight Thompson on bass and Jack Hiles on drums. The sessions took place over a week at Richard Harrow's LivingRoom Studios and the album was released June 21, 1983 - the opening day of the 3rd Folk on the Rocks festival. (Update: Oct. 2010 - Zeke Mazurek passed away after battling cancer - he will be missed by many of us.)