They were considered by many a longshot to win, as they were pitted against shortlist heavy hitters Hey Rosetta and Mark Bragg, but roots folk group All The Wiles took home the grand prize at last night’s Atlantis Music Prize gala in St. John’s.

The grand jury cast their votes and the results were calculated late last night, putting the group’s Painted, with its unique combination of instruments and influences, at the top of an extremely close race for best Newfoundland and Labrador album of 2011.

An independent panel of more than 30 journalists, musicians, and people recognized for their knowledge and appreciation of local music submitted their top picks for the best album released between November 1, 2010 and October 31, 2011. The winning album was decided by a group of six selected jurors and announced to a packed gala show on Thursday, December 15th at The Rock House on George Street, in St. John’s. The band received a $1000 cash prize.

For more information about the Atlantis Music Prize, visit www.atlantismusicprize.ca

Q&A with All The Wiles

Snippets from previous interviews with the band

How and when did the group get together?
Katie Baggs: While I was teaching in BC in 2009 and 2010 I missed playing music in St. John’s and started dreaming about starting a new band. I wrote an email to the others asking if they’d be interested and whether they were planning to be in the city in the fall. Amazingly, they were, and it all worked out nicely.

How would you describe your sound?
Katie Baggs: Saloon-esque, contemplative, dynamic, and shuffly.

How did Painted come together?
Ben Rigby: The songs had enjoyed a prior life with both Jared and Katie but when they brought the songs to the band they were put through a rigorous spin-cycle and emerged as arrangements made for a band. We decided over a few days that we wanted to record something special before I left for the winter, so we rented a space at Trunk Lane Studios and for three days spent every waking hour (and most of the other ones) holed up in the studio crafting an album note for note. I don’t think any of us expected it to turn out the way it did, given the recording conditions we were afraid that once we’d gotten some rest we’d hate it. We also had not spent a whole lot of time playing music in this arrangement at that time, so the recording process served to confirm that we actually are musically compatible (and it sure helped us get more familiar with the songs we play too). It’s a real special thing for us to have as a band and as individuals. We’re extremely proud of it, even though we’re already realigning our sights on new things.

What was the best moment from the recording process?
Ben Rigby: The best moments from the recording process probably won’t make any sense to anyone but us, but I think through the long hours, poor diet, and creative overloading we reached a kind of fatigue and bone-weariness that brought on a high somewhat like a runner’s high; only, it led to things like a saloon-style piano bit on Leaving Song. I don’t think anyone of us really expected that one to work… except Jake maybe, he sees things…

Any other stories about the album that you’d like to share?
Ben Rigby: Well, while recording we discovered that the Nicoll twins have not only the musical intuition that you would hope for from twin brothers but that they also seem to operate on the same sleep schedule, even if separated by rooms or vehicles. We have some hypotheses about them meeting up in the dream world and playing music there too.
-Atlanticmusicprize.ca 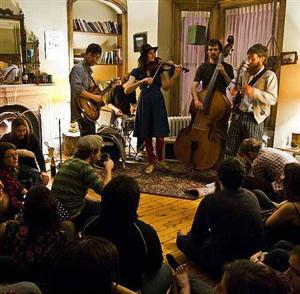