In December, 1969, The Queen City Kids; John Donnelly, Kevin Fyhn, Alex Chuaqui, Jeff Germain and their good friend Rocky Stewart got together in John's parents' basement for their first rehearsal ever and history was made. At all of twelve years old, (actually Kevin the youngest was only eleven), they didn't know much about rock n' roll; except that they liked it and that it was more fun than school.

They were interested in music and were all enrolled in music lessons. Alex was learning the violin and guitar. John was quite a bagpipe artist and was also learning guitar. Kevin was already showing his 6 string prowess and was the first to get an electric guitar and amp. Jeff had been playing in the Police Boys Band for a few years but his parents had not yet caved into the pressure to buy a drum set. All five of the boys went to the same school and were introduced to the fun of a rock band by their music teacher Ken Danylchuk. After hearing Kevin sing his rousing version of Hey Jude in music class John, Jeff and Rocky invited Kevin to join the new band that they were starting. Kevin insisted that his best friend Alex could sing and should be invited too. The first practice was a tension filled affair with friends and family watching as the boys worked their way through songs by the Bee Gees , Beatles and the Animals. More practices followed and the guys became best friends quickly. Jeff got his much yearned for drum set and all the guys got electric guitars. Rocky eventually dropped out of the group but remained a good friend to all the members of the band.

The guys needed a name, as they were about to audition to play at the annual Pile of Bones Day festival in Wascana Park they went with a name suggested by John's Dad, The V.I.P.'s.They passed the audition and began putting together a set of crowd-pleasers like Wipe-Out and House of the Rising Sun. Their performance was given rousing applause and the reviews were very kind. After playing for thousands of people and having such a good time the group was intent on working toward stardom. Even if they were still in grade eight! The VIP's entered the Saskatchewan Homecoming 71 talent contest and won the trophy and prize money for 2nd place in the province. Only the The Lions Stage Band had placed higher. The trophy was proudly exhibited at each boys house for one month at a turn. It is thought to be at Kevin's house at the moment.

The VIPs were playing a lot of Beatles material and other British invasion groups. Then they started listening to the heavier British groups. With all the British influence they wanted an image and name that was like the new British groups like Cream and Deep Purple who didn't use " The" in their group names. Jeff came up with Cambridge. It was immediately accepted and a new phase in the band's career began.

Cambridge auditioned for the Nellis booking agency and were quickly given work playing small town dances all over Saskatchewan. It was great fun for a group of boys that had just gotten their driving licences and were getting quite a good reception wherever they went.

Never ones to be content for long, the boys soon decided that they wanted to be booked by The Quicksilver Talent Agency. This was the agency that booked the local heroes that the boys were in awe of: A Group Called Mudd, Eden, Wascana and Sunband. A phone call was made to Don Hergott the co-owner of the Agency. Don saw something special in the the band as unpolished as they were and after a memorable meeting at the Regina Inn coffee shop, a deal was struck to book exclusively with Don and his brother Sam. The group soon took on a new more professional attitude and began to build their show. A friend named Mike Martin who was a budding audiophile and rock fanatic agreed to come on the road and do sound and lights for the band. Mike was to become an integral part of the band and a fifth partner in a great adventure.

Thus, began a period of rapid growth and advancement for the band. Under Don's wing the band began to become a polished act that could entertain and impress the harshest rock critics. The band's writing matured quickly and they began to make demo recordings for the first time. Cambridge also got the attention of Gary Stratychuk, manager of Wascana and local impresario. Gary booked the band to open for Rush at the Trianon ballroom. Even though they were only 16 and were playing mostly cover material, Blue Oyster Cult, Foghat and the like they wowed the crowd and received a glowing review from Leader-Post music critic Gary Dealy who called the band "seasoned well beyond its years."

A friendship also grew with the members of Rush and their crew. On Rush's next tour of Saskatchewan they asked if Cambridge would again be opening. It was to be a very memorable tour and Cambridge really got to see what the road could really be like at the next level up. There was to be no turning back after that. They liked what they saw.

The members of Rush were very open with the boys and gave them fateful advice about getting a good manager. They suggested that Gary Stratychuk might be a good choice. Stratychuk had the same idea. He approached the band with his vision of taking the group to the top. After much agonizing the guys decided to leave the Hergotts and sign an exclusive contract with Stratychuk's company StarKommand Productions.

The immediate goal was to get a record contract. First came a change of name. The group needed a name that was about them now that they were writing their own songs. They wanted to get away from being identified with the British idea and say something about where they were from. During one road trip Mike came up with the Queen City Kids and as the guys heard the name for the first time they realized that they had found the one. A great celebration took place in the van as Cambridge became QCK.

Many demos and showcases for many labels had failed thus far to secure the Kids a credible record deal. It was at this point the band decided to take matters into their own hands again and this time produce release an independent album. Gene Martynek producer of the successful Rough Trade album agreed to produce for the band. However, when CBS records heard that Gene was interested in the project they quickly came on board and signed the Kids to a multi-album deal.

It was arranged for the first album to be recorded at Century 21 studios in Winnipeg. Most of the songs for the album had been performed and honed to a sheen on the road so there was not much to do except go in and record them. It was a bit of an eye-opener though as the Kids discovered how different it was to play in the studio. Now the emphasis was on technique, not just the raw energy that was the trademark of their live shows. But under the kind wing of Gene the band put out a very interesting album with a lot of diverse sounds and styles. It was a little hard to categorize the band. But the fans didn’t mind and they bought it up quickly in the markets that the band had played heavily. The album went to number one in Regina and Winnipeg. And very quickly was certified gold.

The group was booked to tour with Ozzy Osbourne and played Maple Leaf Gardens. They received great response and had some fine reviews along the way. By this time the touring was non-stop and the pace was dizzying. Back and forth across the country the band played tours with April Wine, Streetheart, Joan Jett, Blue Oyster Cult. ,As well as many showcase dates of their own including a show at the legendary el Mocambo. On top of this they were expected to be writing material for their next album which they were told was needed quickly as CBS records in the states had decided to pass on releasing the debut. They (CBS) were anxious to hear more though and promised to help get the second one recorded and ready for the states.

A search was started to find a producer from the states that could help with getting a release down south. Rob Freeman, an engineer from New York who had worked with the Go-Go’s on their smash debut album was found and agreed to take on the project. Rob’s vision was to try to better capture the live essence of the band. His idea was to build a studio in an ambient room and mic the room for all its interesting echo effects and simulate the sound of arena rock.

The Mitchell – Copp building on Portage avenue was an abandoned turn- of- the- century bank with huge ceilings and cavernous rooms. It was rented for the month of January and recording equipment brought in to begin the 24 track recording. The weather was frigid and the equipment did not like the transition from cozy studios to this new environment. But all adversities were overcome and the album was done on time and under budget.

Despite furious touring and extensive air-play for the songs Dance and Girls, Black Box QCK's second album did not reach gold status. Poor marketing and management were beginning to dog the band and the amount of touring was wearing it down. They had now been together for 13 years and living in each others pockets for much of that. The guys had little money personally and were tired of seeing all their hard earned wages go to their increasingly demanding manager.

On top of all this it was becoming very uncertain that their next album would get released at all by CBS who had released a very minimal number of Black Box albums in the States and did almost no support of the project at all. It was decided that it was time to break up the band up and everyone go their separate ways. No one would carry on as the Queen City Kids. Instead, John and Jeff formed a punkish band called Love Active with former Doris Daze singer Kim Albright. Alex went out with a new project called Straw Dog. While Cal free-lanced with some Regina groups and later with Kenny Shields.

It would be a few years before the Kids again surfaced. As a way of helping Alex finance his wedding nuptials the group agreed to reform for one show and throw Alex a social. It was a great success and buoyed by the event and the realization that they hadn’t been forgotten by their fans the group made a point of performing a few reunion gigs each year.

In October 2007 QCK was inducted into the Western Canada Music Hall of Fame. The guys were honored by their peers and humbled by being included with the likes of Streetheart, Loverboy and Harlequin, as well as cultural legend Buffy St. Marie. Now in their 40th year of operation the Kids are still out there rocking from time to time at special events and festivals. Watch this site for updates and news of gigs, recordings, and happenings. Who knows how long the kids will be kids? They don’t seem to show any signs of wanting to grow up just yet. 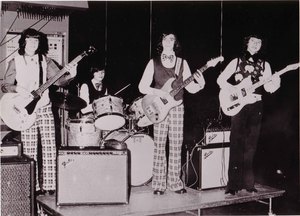 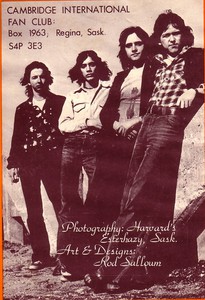 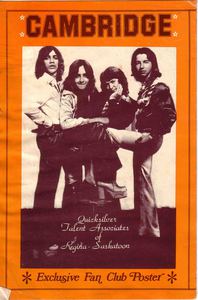 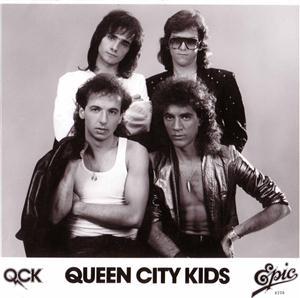