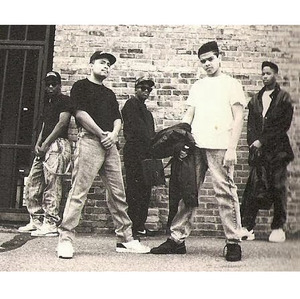 EQ is The Incredible Ease and his partner Quaze, Seattle's DJ King Otto, and later Kilo-Cee who would be added to the line up to handle DJ duties north of the border as well as the majority of scratches on Swellsville. EQ first caught my attention when they tore the house down opening for Public Enemy at The Orpheum. Then they did the same when they were the special guests at UBC's DJ Sound Wars. Add to that they they had a video playing on Much Music (a first by a Vancouver Hip-Hop group) and they were instant Hip-Hop heroes.

Ease & Quaze are responsible for Vancity's first Hip-Hop classic with 1990's "They Can't Cope", which is the b-side to EQ's debut 12" "Put Yo Body In It". Swellsville was supposed to be the album that followed, but due to industry rule #4080 it never saw the light of day. A handful of cassettes made it to the group but that was it. If you never got your hands on one of those tapes, which is pretty much everybody on the planet, then you never had a chance to hear Swellsville. It is a familiar story, but an all too real one that kept the world from hearing an ill fucking album that should at very least be recognized as a Canadian classic. Maestro Fresh Wes and Main Source aside, I put Swellsville up against anything released in the early 90's - Dream Warriors, Devon, MCJ & Cool G, Kish, Ground Control, Organized Rhyme or any of the other rappers I saw on Much Music's Soul In The City "Rap" specials back in the day. The production on Swellsville can give Maestro and Main Source a run for their money too. Straight up. The beats are hard as hell.

In a 2007 article for the Canadian Rap Music blog Living Underwater, Vancity OG Birdapres summed up Swellsville by saying "Much could be said about the potential impact of this missing classic, and what could have been. To hear it is to understand. No Hip House or love songs. No clumsy attempts at pop accessibility. Hard beats, fresh rhymes and scratching. The sort of thing that heads in 1991 would have latched onto gratefully."

With the recent passing of our friend Edwin Kohn, aka The Incredible Ease, it feels like the perfect time for Swellsville to see the light of day (it is far overdue actually). Anybody that has ever had the pleasure of meeting Ease knows what a cool cat he was. He lived and breathed this Hip-Hop shit. Whether it was Ease and Kilo every Tuesday at Midnite taking over the airwave with the legendary Krispy Biskut show, or him rocking the mic with EQ (or on the solo tip), or hosting concerts and parties, The Incredible Ease has influenced and educated us all. Rest In Peace Homeboy."