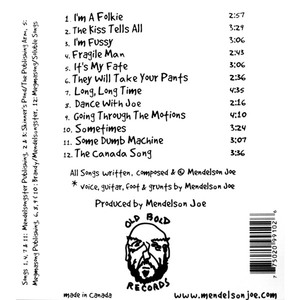 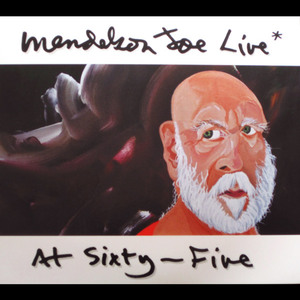 Despite his eccentricities, there's no musician in Canada who embodies the spirit of punk rock more than Mendelson Joe. As a constant thorn in the side of politicians, and champion for the eradication of both racism and smoking, Joe has rightly earned a place in the hearts of every socially conscious Canadian. What are often forgotten though are his unique musical abilities. It's almost unbelievable to think that Live At Sixty-Five is his first major release since 1988's Born To Cuddle, but the ensuing years haven't diminished Joe's performing skills one iota. Although recorded in fall 2009, Live At Sixty-Five serves more like a "greatest hits," as Joe revisits much of his most beloved solo material, such as "Fragile Man" and "Dance With Joe." The intimate setting accentuates the inventiveness of his guitar playing and his overall unique sense of melody. With Canadian culture becoming increasingly homogenous, Joe couldn't have timed his musical return any better in order to remind listeners what true originality means. (Old Bold)
-Jason Schneider, Feb 12, 2010, exclaim.ca

What M. Joe says about his new CD: “The songs embodied herein are a tiny snippet of my story from the early 1970s to the present. Imre de Jonge recorded me Live at The Barn, Huntsville, Ontario in September 2009. Torontonian Michael Damico souped up the sounds, sequenced, mastered and co-produced the packaging. I made the paintings, took the photos, wrote the writings, designed the package and produced this recording for OLD BOLD RECORDS.”