CD-Pillorikput Inuit - Inuit Arias For All Seasons INSIDE

CD-Pillorikput Inuit - Inuit Arias For All Seasons BACK 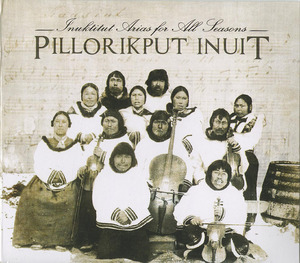 Inuit Arias For All Seasons

Moravian missionaries arrived in Labrador in the mid-eighteenth century, bringing with them the sacred musical traditions of Europe. With Pillorikput Inuit (Blessed are the People!) Executive Producer Tom Gordon (who also created the performing editions of the music) and Music Director Kellie Walsh present contemporary recordings of this historical repertoire, bringing together Inuit singers from Labrador and trained classical musicians to create a crisp, clear sound from the manuscripts found in the churches of the Labrador coast. For the first time, we can hear these arias in their Inuktitut translations under ideal conditions. As the liner notes remark, early audio recordings are filled with the “hisses and pops” of early tapes (p. [ii]). What risks being lost in a new project such as this is the voice of the Inuit of Labrador—but thanks to the choices of the producers, the listener retains this privilege. While much of the repertoire is not actively sung today, this collection introduces the audience to how one region’s Indigenous communities responded to the introduction of Western Art music over the past two centuries.

The first sounds of the disc set the tone for anyone ready to listen and won- dering what to expect of Moravian music in Labrador. The organ and strings gently establish periodic phrases for the entry of the sweet trombone of Chris Miller. It is the voices, however, that provide the distinct sound of this record- ing. Two Inuit singers, Deantha Edmunds, soprano, and Karrie Obed, tenor, are the featured artists of this disc, and the album is at its best when both voices shine. Edmunds is “Canada’s first classical singer of Inuit descent” ([ix]), while Obed, who has been the lead tenor of the Nain choir for over two decades, represents the traditions of Labrador on this recording. (p. [x]). The juxtapos- ition between these voices is striking for their difference: Edmunds presents a clear classical soprano, while Obed’s tenor is more timbrally characteristic of traditional Inuit singing. The combination, however, contributes to the sense that this music is intended for all—whether trained or untrained, in the celebration of the Moravian traditions in Labrador, and their translation and re-purposing for the Inuit population there. The song texts are presented in Inuktitut, transforming their meaning across cultural boundaries from Western European centres to the Canadian eastern arctic. The collection of composers—some more recognizable than others—includes leading writers and clerics from Moravian and non-Moravian traditions, with a focus on Dresden and London-based musicians.

Pillorikput Inuit is organized according to the “spiritual year” in Labrador, beginning with three arias for the Christmas season. The opening track, “kausiut nuijotit,” sets excerpts from Morning Star, Thy Cheering Light by Julius Otto of Dresden. This trio setting features Edmunds, Obed, and Miller (as noted above). This trio also offers an example of the changes introduced in Labrador, as a Labrador musician added the second voice, and Otto’s original ventilhorn solo was rewritten for trombone. Two shorter songs close this section while featuring the soprano voice of Edmunds: John Antes’s (an American-born Moravian composer) “Prince of Peace,” presented as “Jêsuse Immânuel Puaila- vik” in the Nain translation and “Engelit Killangmiugasekuit,” the translation of Haydn’s “The Marvelous Work Beholds Amazed” from The Creation. The latter work also includes Innismara Vocal Ensemble, a St. John’s based choir “dedicated to the performance of the intimate and hidden treasures of the vocal ensemble repertoire” (p. [xi]).

The first of two important local holy festivals frames the next two tracks, as we celebrate “Married People’s Day.” “Tattikartok Gudiptingnik iglunga” is an example of a song celebrating “love both for God and for mankind” used for this occasion. Composed by Leonhardt de Call, this rendition presents a duet between Edmunds and Obed in what the liner notes describe as “one of the most beloved pieces in the Labrador repertoire” (p. [vi]). Paired with this track is Handel’s “Wise Men Flatt’ring May Deceive Us,” from Judas Maccabeus, included in the Hopedale collection as “Jesusib najorningane .” Here, the organ and strings are joined by two flutes in support of the soprano voice.

The majority of this album’s tracks come from the Easter season, with two arias for Palm Sunday, six from Holy Week, and one from Easter Sunday. Beyond its religious importance, this season marks the end of winter and, in Labrador, the beginning of Inuit heading to the land to spend time in their summer camps (p. [vi]). As this is the busiest season of the year for the church, there is presumably much music for these occasions in the collections of Labrador’s Moravian churches, giving reason for the large number of arias in this part of the CD. The aria which marked the beginning of the Easter season in Labrador is Johann Daniel Grimm’s “Kuvianak Bethaniab iglunak” (“Bethany, O Peaceful Habitation”). The majority of the tracks from Holy Week are solo anthems, featuring Edmunds with various ensemble combinations including Innismara on Johann Gottlieb’s “Jesusib aunga ikkingillo” (“Asleep in Jesus’ Arms and Presence”), which remains part of Holy Thursday services in Nain. Tracks 9 and 10 present solo anthems with stories from the Gospel Passions. With Track 12, “Kânnorle Kanok pivianadlarput,” we hear the return of Obed’s tenor voice, the truly distinguishing feature of the CD. This duet marks the first of three entries on the album by composer Charles Ignatius LaTrobe, an English composer and Moravian clergyman who befriended Haydn in London. Holy Week concludes with the second LaTrobe composition, “Nâlegak inôgutaujok” (“Lord of Life, Now Sweetly Slumber”), with two soloists accompanied by chorus, flutes, clarinets, strings, and organ. For Easter Sunday itself, Handel’s Messiah is celebrated in Labrador as in much of the West. On this album, Gordon includes manuscripts found in Hopedale of the aria and chorus, “I Know that My Redeemer Liveth and Since by Man Came Death”—“Kaujivara Jêsus / Sorlo attautsimut .”

Finally, the Church Anniversary Festival closes this compilation, with two tracks which commemorate the establishment of Moravian missions in Labrador on February 19 (p. [viii]).

The first of these is Carl Wilhelm Fliegel’s “Evening Prayer,” (“Evening Song” in the liner notes (p. [ix]) presented in Inuktitut as “Saimartigut, Jêsuse!”—written for chorus with soprano solo. The final, and title, track, “Pillorikput inuit opigosugungnartut” (“Blessed are the People”) returns to composer LaTrobe— the most represented composer in this collection. Obed’s voice opens this an- them for two soloists and choir, originally written for LaTrobe’s own church in Fulneck (in Leeds, UK). The liner notes for this final track describes the resonance of the words “Blessed are the people that know the joyful sound, In thy name shall they rejoice all the day!” for the Inuit of Labrador “celebrating the arrival of Christianity among them” (p. [ix]).

The recording is packaged in a cardpaper Digisleeve, with liner notes in one side and the CD itself on the other. There are 12 pages of liner notes for this album presented in English and in full Inuktitut translation (tallying for a 24-page booklet). That the English comes first is not surprising, as it is English speakers that are likely the primary audience for this project—but the presence of Inuktitut also suggests a mutual interest in having this collection shared among the Inuit of Labrador. The notes themselves focus largely on the role this music played in local service and in the “spiritual year” in Labrador. Along the way, however, we also learn some biographical sketches of composers in the Moravian tradition, such as LaTrobe. We also discover links between Dresden (home to many of the German composers represented here) and Labrador through the Moravian Church. There are three black and white photos of Labrador churches and musicians (including the cover photo, which recurs toward the end of the booklet), along with a colour photo of soloists Edmunds and Obed on the sleeve. The booklet offers enough information to entice those interested not only in Moravian traditions in Canada, but also those with an interest in eighteenth-century music more broadly, in a very concise package.

The liner notes also direct the reader/listener to a companion website (http://www.mun.ca/mmap/back_on_track/) for the archival recording, Ahâk, Ahâk! Moravian Music of the Labrador Inuit . On following this link, unfortunately, this reviewer was not able to find the materials listed in the liner notes. Instead, there was information about this CD, including two sample tracks—Ahâk Ahâk upkuerrutjilaukpunga and Kânnorle kanok, pivianadlarput . A separate CD from the “Back on Track” series, From the Big Land: Music of Makkovik featuring Gerald Mitchell (http://www.mun.ca/ mmap/research_pub/back_on_track/makkovik/) does contain one archival recording of country-inspired Inuit gospel music. The documentary film, Till We Meet Again: Moravian Music in Labrador is, however, available to view on the CBC website (http://www.cbc.ca/player/play/2263655823) and contains numerous video and audio clips of vocal and instrumental music in the Moravian churches of Labrador.

Another challenge to this reviewer is the small number of Inuit musicians used in the project. In this light, I find Obed’s voice to be particularly captivating and wish there were more opportunities for him to be heard throughout the album. The liner notes begin with mention of the re-conception of this material to fit with the aesthetic and spiritual lives of Labrador’s Inuit population. Inclusion and translation of the Inuktitut lyrics to the anthems of this collection would help the Western consumer of the CD to appreciate and understand these aesthetic differences where the text is concerned. For those of us with some knowledge of the Inuktitut language (and for others, too), the presence of lyrics would further enhance the listening experience, allowing listeners to engage more deeply with the words. The exception here lies in the notes for Track 2, where lyrics for John Antes’s “Prince of Peace” are translated in both the Nain and Hopedale versions, illustrating regional differences in Labrador.

Pillorikput Inuit represents an important contribution to the study of music in the Labrador, music in Canada’s North, and music in Canadian Indigenous communities. The musical repertoire blends colonial and Indigenous perspectives and presents one community’s method of infusing Indigenous perform- ance into an introduced music. This audio recording provides the opportunity for listeners to engage in the spiritual life of Labrador Inuit through the lens of the Moravian Church heritage. The recordings themselves are of the highest quality, with each instrument clearly heard, yet always in support of the voices. At its best on those tracks which feature Karrie Obed’s tenor alongside soprano Deantha Edmunds, the listener participates in the blend of Europe and Labra- dor’s Inuit, immersing themselves in two hundred years of underappreciated musical history in Canada.
-Jeffrey van den Scott, Intersections 36/1 (2016)