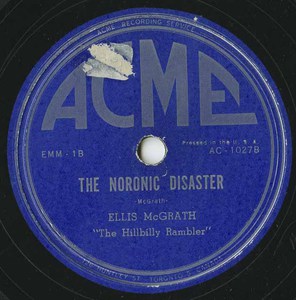 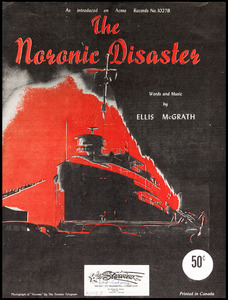 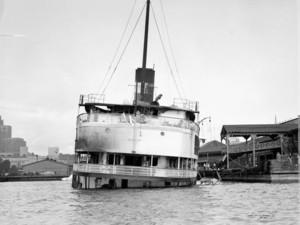 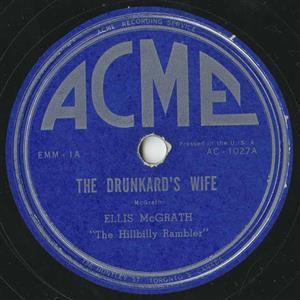 The Drunkard's Wife // The Noronic Disaster

The SS Noronic was built in 1913 for the Northern Navigation Company, soon to be absorbed by Canada Steamship Lines (CSL). She was built by the Western Dry Dock and Shipbuilding Company of Port Arthur, Ontario. She was one of the largest passenger ships on the Great Lakes, with dimensions of 362 feet x 52 feet x 24.8 feet (110 metres x 15.8 metres x 7.5 metres); she had five decks and a gross tonnage of 6,905; she was capable of carrying 600 passengers and 200 crew. The Noronic made her maiden voyage in 1914 and over the next four decades, the "Queen of the Great Lakes" was one of the finest and most popular of the Great Lakes passenger ships.

On September 14, 1949, the Noronic embarked from Detroit, Michigan, on the first of three post-season cruises. With 574 passengers and 131 crew, she planned to call at Cleveland and Toronto en route to Prescott and the Thousand Islands. On the night of September 16th, she docked at Pier 9, Toronto Harbour, and settled in for the night. A majority of passengers and most of the crew disembarked for an evening on the town.

About 2:30 a.m. on the morning of the 17th, a passenger discovered a small fire in a linen closet. Attempts to extinguish the fire proved futile and the flames spread quickly through the wood interior of the ship. Within 10 minutes, the Noronic was a raging inferno. Passengers, most of whom were sleeping, were roused from their beds, but with the corridors filled with smoke and choked with people, many found it impossible to escape the chaos. As fire raced through the cabins and corridors, some passengers jumped into Toronto Harbour in a desperate attempt to save their lives. The Toronto Fire Department arrived on the scene in minutes and rescued as many people as possible, but they could do nothing for the Noronic. By 5 a.m., the "Queen of the Great Lakes" was a smoldering ruin, a victim of a devastating fire that left over one hundred dead and scores injured.

Many of the 119 dead were burned beyond recognition. Identifying them was a colossal undertaking and a Medical Identification Committee, established by the Ontario government, developed new procedures using old and new x-rays to identify most of the burn victims. To complicate matters, all but one of the dead were American citizens.

The federal government immediately appointed a Court of Inquiry under Supreme Court Justice Roy L. Kellock. The hearings convened in Toronto on September 28, 1949 and did not conclude until November 7, 1949. Justice Kellock released his report two weeks later and concluded that while the cause of the fire was unknown, more passengers might have been saved if fire-fighting equipment had been adequate and both officers and crew had been familiar with emergency procedures. The Kellock Commission made several recommendations to improve fire prevention measures, including the need for fire-resistant bulkheads, patrol systems, sprinklers and automatic alarms.

Shipwreck InvestigationsWhile the cause of the blaze was never determined, company officials suspected arson --and with good reason. Less than a year later, on August 14, 1950, the CSL passenger ship Quebec, with 426 passengers, caught fire in the St. Lawrence River. Fortunately, she was able to dock at Tadoussac where the fire was brought under control, but not before seven passengers died and many were injured. Without the quick thinking and actions of the captain and crew, this incident, serious as it was, could have been catastrophic. Comparisons were made to the Noronic disaster, especially when federal investigators determined that the fire had been deliberately set in a locked linen closet. No one was ever brought to justice and not long afterwards, CSL decided to phase out passenger ships from its fleet.