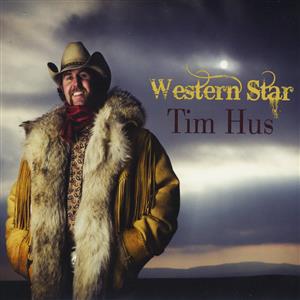 Album Notes
Western Star, Tim Hus’ third album on
Stony Plain Records, (the sixth of his career)
drives his career forward with the momentum of a fully loaded tractor trailer.

With the passing of his friend and mentor Stompin' Tom Connors,Tim Hus proudly carries on the tradition of writing songs about working Canadians and Canada's rich history. With his Canadiana travelin' band, Tim Hus brings his music to small town community halls, major international festivals, and every truck stop in between.

Lyrics from this newest release describe Tim Hus best: … “I'm just a singer standing on a stage, following the footsteps of those who led the way.”

• Special guests were carefully selected to add certain touches to the songs and form a connection with the tradition and origins of roots and country music and to tip the hat to those who have traveled this road before. These special guests include Kenny Vaughan (Marty Stuart), Hank Singer (George Jones), Wanda Vick, Chris Scruggs, Glen Duncan (a former member of Bill Monroe’s Bluegrass Boys), Tim Graves, and Kayton Roberts (a member of Hank Snow’s legendary Rainbow Ranch Boys).

• Two of Tim’s songs appeared on the soundtrack of the movie Hank Williams First Nations that won “Best Music in a Feature Film” at the Nashville Film Festival.

The perfect soundtrack for a family road trip through idyllic, yellowing Alberta wheat fields. Western Star, Tim Hus’s sixth album, opens with the fast past rambler title track, and Hus delights us with his retelling of his adventures as a truck driver.

This song sets the pace for the rest of the album, as Hus enchants us, sharing the stories of the everyday working man across Canada. Even people that aren’t fans of country can take delight in this album’s lightheartedness and upbeat, catchy tunes.

The album really sounds its finest on “Madawaska River”, “Western Star” and the delightful “Hardcore Apple Picker”, a song that will have you singing along and stomping your feet. Hus recounts summers spent packing, picking and falling as he falls in love and ships countless apple crates all underneath the hot Okanagan sun.

At its heart, Western Star is a sincere retelling of the life of the everyday Canadian working class man. Truck drivers to potash miners and anyone with an interest in Canadian folk can relate to this album. It’s no wonder he’s supported Canadian acts like Corb Lund and Stompin’ Tom Connors. Tim is well on his way to becoming one of Canada’s most well-respected country musicians as he plays bars and backyards across the country, spreading his church of country music.
If you want to catch Tim Hus in person or pick up a copy of this CD, he’ll be playing Edmonton twice this October. First on Oct. 3 for his CD release and then again on Oct. 4 at the Uptown Folk Club.

Looking through his tour schedule you’d be hard-pressed to figure out when he has time to write new songs. After Edmonton he’ll be looping through small town Alberta and then off back east, crossing Canada’s endless wheat fields and rivers.
-Allison Leonhardt