Connors, Stompin' Tom - Canada Day, Up Canada Way b/w I Am the Wind 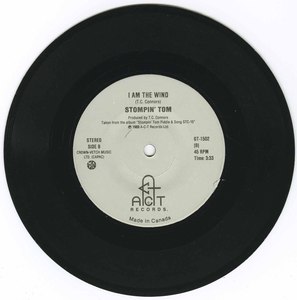 Stompin Tom Connors - Canada Day, Up Canada Way b/w I Am the Wind 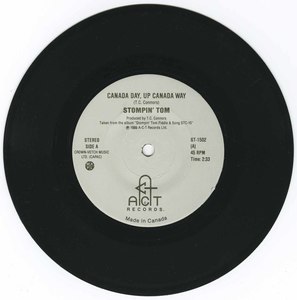 Canada Day, Up Canada Way b/w I Am the Wind

Just days after performing at the Peterborough funeral of Canadian music legend Stompin’ Tom Connors, who died at his home in Halton Hills on March 6, 2013 at age 77, award-winning Caledonia musician and singer Mark LaForme spoke with The Sachem about the experience and reflected on the deep friendship between the two.

“Tom used to call us Brock and Tecumseh,” quipped LaForme, himself of Mississaugas of the New Credit First Nation heritage.

During the War of 1812, British forces under the command of General Isaac Brock allied with Shawnee Native Chief Tecumseh to fight back the American invaders.

In fact, LaForme was always surprised how much his friend Tom knew about Native history and issues.

“Tom was very curious about Native history,” added LaForme. “I gave him as much as I knew, which wasn’t much, but in turn it inspired me to learn more about my own history; I was somewhat embarrassed by my lack of knowledge.”

“Tom was mostly curious of the spiritual nature of Natives, which again, I sorely lacked knowledge of,” but added, “Tom really liked my Native jokes and humour, which is slightly more abundant than my sense of history.”

“In short, he was very sympathetic to the struggles of the North American Natives,” noted LaForme.

A member of the Stompin’ Tom Connors Band for three Canadian Tours, the last one as recently as 2011, LaForme, now 58, was surprised to find out his friend had pre-selected him to perform at his funeral, which the native of St. John, New Brunswick sensed was coming soon.

The song ‘I Am The Wind’ was one of Connors’ favourites and even on tour, entrusted LaForme to do the honours every night as he liked his friend’s performance of the song better than his own.

“I was totally surprised, humbled and honoured that Tom would consider me during his final days,” said LaForme.

“I knew he liked my version from the first day I played it for him, but I never knew it was so important to him.”

“The lyrics were on the programs for both the funeral and memorial, which meant I had better get the words right,” he added.

It seems he did indeed get it right, as the relieved musician explained.

“After my performance of Tom’s song, I had many people approach me to tell me they were very moved close, if not to, tears.”

“Although I gave it my all, I cannot take credit for that reaction, as the words Tom wrote have deep spiritual meaning; almost in the Native sense,” he said humbly.

Not about to let LaForme off lightly, he was coaxed by The Sachem to give up at least one funny story from the years on the road with the legendary singer/songwriter; well known to be a fan of an old fashioned east coast “kitchen party” and warm Moosehead beer.

Up to the task, LaForme told of a legendary tale from 1998 in the rough and tough forestry, drilling and mining town Fort St. John, BC where they spent a three-day break during the tour.

They used this downtime to have a three-day drinking contest amongst themselves. Stompin’ Tom was declared the winner, as LaForme ended up in the nearest hospital recovering.

Laforme had always hoped to redeem himself one day… but it was not to be.

“I vowed to get even one day, but during the 2011 tour, we were warned by Tom’s wife, Lena, that there was to be no more such contests.”

“She lovingly, but sternly, scolded us, saying we were both a lot older now and hopefully wiser,” LaForme recalls, adding, “These days, I don’t drink at all.”

Connors may have had a rough exterior to his fans, but his pal assures us his heart wasn’t that way at all.

“He could get very emotional about things that were important to him: his family, friends, and of course, his country,” beamed LaForme.

Asked how he’d like his friend remembered, LaForme has some profound observations.

“It has already been fully realized,” he offered.

“Although Tom’s songs appear simple, funny and cute sometimes, the man who wrote ‘Bud The Spud,’ ‘The Hockey Song,’ and my personal favorite, ‘Moon Man Newfie,’ was a true genius in the way he researched and constructed lyrical imagery that could touch and relate to the hearts and minds of the common man… he will be missed.”

Standing in front of a packed hockey arena as a nation watched, any nervousness Mark LaForme had was eased by recalling the usual words of encouragement from his friend who was there beside him in a Canadian flag-draped casket with the black cowboy hat on top.

“Just do the best you can… that’s good enough.”