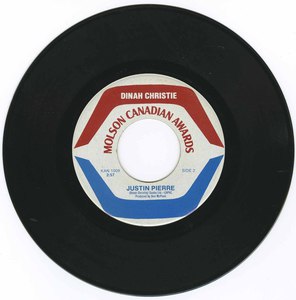 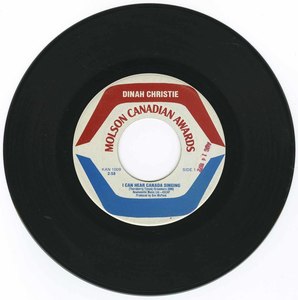 On October 20, 2015 Dinah Christie and Robert Williston made this single available on itunes after she found her single on citizenfreak.com.

Oct 30, 2015:
Early in September, at a Justin Trudeau election press conference in Vancouver, a middle-aged man with mop-top hair wearing a tam o’ shanter took over the microphone. In a somewhat high-pitched and excited delivery, he offered Trudeau an off-the-wall, who-knew, factoid: North Vancouver Green candidate Claire Martin, the ex-TV weather expert, had decades ago appeared in the Pink Floyd video for The Wall album.

As this historic detail was absorbed by Trudeau, the phalanx of Liberal candidates behind him and the assorted journo types who began to smirk, the inquisitor segued to his real point: “But you, Mr. Trudeau, have a rich rock-and-roll tradition.

“You and your family.”

Nardwuar, in his role as a reporter for CiTR Radio at the University of B.C., expected to be escorted out by Trudeau’s handlers. Previous requests to interview the Dauphin of Canada’s most famous political family had been turned down.

The Tyee is supported by readers like you
Join us and grow independent media in Canada
But Nardwuar is not easily intimidated; this is the guy who asked Mikhail Gorbachev which world statesman “has the largest pants.” He pressed on, presenting forgotten musical artifacts about the Trudeau family saga, a technique he regularly uses to draw out his interview subjects, whether they’re rapper Jay-Z or PM-to-be-JT.

“Every single time I do this, I’m nervous,” said Nardwuar of his ambush interview style. “Not only am I trying to ask my questions, I’ve got all my records. And I want to be able to grab them. And I don’t want people to grab me. And it’s a crowded area. Yeah, it’s pretty intense.”

Nardwuar asked the Liberal leader if he was aware of a 1972 record called Justin Pierre by singer Dinah Christie, a 45-rpm folk-pop ode to Justin Pierre Trudeau who was born on Christmas Day, 1971. Nardwuar reached into a bag and pulled out said vinyl record, a disc that recalls our country’s once intense fascination with all things Trudeau: Prime Minister Pierre Elliott, Margaret and their three kids.

“I hate to date myself because I try to talk about how old I am as often as I can,” replied the Liberal leader. “But I don’t have that particular song on my iPod.” (This was a wittier response than rapper Snoop Dogg’s reaction in one of his seven interviews with Nardwuar: “You’re funnier than a motherf*er.”)

What’s hilarious too is the strange revival of the sunny Mamas-and-Papas-ish single “Justin Pierre” after Nardwuar’s interview with Trudeau spread through social media.

The morning after Trudeau’s election, Nardwuar received an email from a woman, Zoe Carter, who is the sister of Noah “40” Shebib, the Canadian record producer behind mega-star rapper Drake. The sister, Carter, has a godmother -- none other than Justin Pierre singer Dinah Christie. They’d seen Nardwuar’s Trudeau interview and were fans because of a previous interview Nardwuar did with Drake. They wanted to get Christie’s Justin Pierre on iTunes.

Nardwuar connected them to the Museum of Canadian Music, which is online at CitizenFreak.com. The site, which was created by Vancouver’s Robert Williston, has the single “Justin Pierre” and the flipside song, “I Can Hear Canada Singing.” And now, because Nardwuar brought the album to a campaign press conference, Christie’s Justin Pierre is available on iTunes for 99 cents.

“For me that is the ultimate success of an interview. I do an interview and it sheds some light on a record that people forgot about,” said Nardwuar. “And now the record has been released on iTunes. And that it connects back to Drake, which is incredible... This shows how small Canada is.”

(Geezer readers may recall that Christie sang satirical songs on CBC TV’s groundbreaking This Hour Has Seven Days in the ’60s and was a regular performer on the TV series Party Game in the early ’70s. Even master researcher Nardwuar was unaware of Christie’s earlier media persona.)

Nardwuar’s free-wheeling approach to interviewing reminds me of a freelance writer friend’s take on scoring media schwag: It never hurts to ask.

And because Nardwuar asked Justin Pierre about Justin Pierre, Canadians can now thrill to these lyrics:
Beautiful morning, beautiful child / Welcome to the land / Many more friends than you ever could guess / Are waiting to see you stand / And walk through a country young and strong / See all the power there / So many friends will sing you this song / Welcome Justin Pierre.”

You begin to get why one writer for Slate.com recently call the CiTR host “one of the greatest living practitioners of the art of the interview” and “a living repository of the history and folklore of popular music.” Nardwuar’s ability to prod interview subjects with the curios from their past was also celebrated in a column this year in the New York Times Magazine with the writer calling the North Van man “my favourite journalist.”

But back to Nardwuar versus Justin.

Nardwuar pulled out Go Go Trudeau, an LP recorded in 1968 by the Quebecois band, The Sinners. “I prefer ‘go go’ Harper these days,” replied Trudeau. He pulled out “Song for Margaret,” a 1976 song about Trudeau’s mother by a musician named Mackenzie King.

“I know him best as prime minister,” quipped Trudeau about the musician. Then came by “Fuddle Duddle” by Antique Fair and a P.E.T. Paperdoll Dress-up Book -- “I believe I have an app for that now,” said the future prime minister.

And then the piece de resistance: A 45-rpm limited edition of Vancouver punk band DOA’s fabled “Triumph of the Ignoroids,” an album from 1979 with a cover that featured the infamous Rustler Magazine photo of Margaret Trudeau in a New York City night club.

To be safe, in case Trudeau looked closely at the album, Nardwuar had attached a “Doot doo” label over the naughty bits, which gave the photo such notoriety back in the day. (Not that Trudeau is unfamiliar with the scandalous photo -- he mentioned it in his recent memoir, which Nardwuar read in preparation for the press conference.)  “One last question: Your dad, did he ever swallow a gold fish?”

“No, I think that was Ozzy Osbourne,” replied Trudeau fils.

Nardwuar’s Trudeaumania goodies were amazing. (He even had a 1968 Trudeau election poster, given to him by the owner of Neptune Records on Main Street.)

Nardwuar wanted to ask Trudeau about whether his mother sang backup on ’Safety Dance” by Men Without Hats, which, according to the Internet, she did, but he didn’t get to the question. “I had it in my notes. There were quite a few other things I could have asked there.”

The Nardwuar vs. Justin Trudeau exchange generated over 57,000 views on YouTube. “It doesn’t compare to when you interview a rapper and you can get 30,000 views in one day,” said Nardwuar. “But for politicians, I think I am doing very well.”

The best Nardwuar interviews are with rock stars who are initially taken aback by his hyper-nerdish aggressiveness but gradually become blown away by his bravado and research. One of his biggest fans, Questlove, frontman of The Roots, the band on Jimmy Fallon’s The Tonight Show, became emotional in one memorable interview as Nardwuar gave him rare albums and collectibles about the history of soul music in Philadelphia, the bandleader’s hometown. “I truly believe you could have found Bin Laden,” gushed the dazed Questlove.

Nardwuar presented Questlove with a poster of soul groups, including one band from B.C.: Bobby Taylor and the Vancouvers. Taylor is famous for discovering The Jackson 5. Nardwuar asked Questlove to give one of Vancouver’s own credit for discovering Michael Jackson. Questlove replied: “Yes, you take more pride in your city than any other historian I have ever known, repping their particular city. You rep Vancouver better than any other rappers rep their areas.”

Pharrell Williams was astonished during an interview when Nardwuar pulled out a vinyl record with the first recorded track ever made by the rapper. “This is one of the most impressive interviews I’ve ever experienced in my life. Seriously... Your research is second-to-none. Second-to-none.” Williams became such a fan that he hired Nardwuar to produce video interviews for his YouTube site.

Nardwuar is arguably the second most famous person ever to be born John Ruskin, the first being the Victorian-era English art critic and social thinker who, according to some historians, was unable to consummate his ill-fated first marriage because he was shocked by the sight of his bride Effie’s pubic hair.

Nardwuar first interview was with Vancouver punk legend Art Bergmann on Sept. 26, 1985. Nardwuar was then president of the student council at Hillside Secondary in West Vancouver. A few years later he enrolled at UBC and joined CiTR radio. Soon Nardwuar has his own show, which he has kept going to this day.

In between Nardwuar has worked for MuchMusic, established his own YouTube channel and achieved a small but sui generis celebrity in the pop music world. (He also fronts the great local band, The Evaporators). But his exchanges with politicians have had some notable bon repartee -- and are among his personal favorites.

I first saw Nardwuar in action in 1993 at UBC when former prime minister Pierre Trudeau, by then retired, held a press conference to hawk his new memoir. As Nardwuar stood to ask a question, I was rapt in anticipation about what the madcap indie video maker might ask the imperious Philosopher King.

Nardwuar wanted to know whether Trudeau had prohibited ex-wife Margaret from playing rock and roll music when they lived together at 24 Sussex Drive. The merry prankster told the Rt. Hon. how he’d once been told that the only place Margaret was allowed to rock out was on the porch, with headphones.

The former PM laughed and joked: “Well, the porch was part of 24 Sussex too.”

Nardwuar pressed on with this interrogation, prompting Trudeau to recall: “I’m not sure if it was rock n’ roll or whether it was Beatles music. But there was certainly a lot of music being played when I was around. Except I wouldn’t allow it to be played in my study.”

To which, Nardwuar exclaimed: “Ah, ha!” To which Trudeau countered, “Don’t you believe in the freedom of your own space in your own house? Ah, ha!”  “So I guess she [Margaret] was right then?” asked Nardwuar. “Oh, she was always right,” replied the Northern Magus.