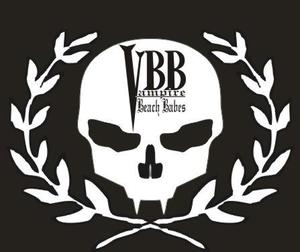 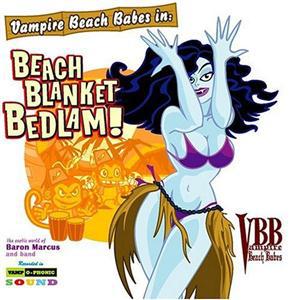 "Combining the best aspects of retro horror kitsch with a dark undercurrent of goth, the Vampire Beach Babes draw on the self-parodying humour used to such advantage by the Cramps and make it their own. Shemale Murphyesque vocals give heft to pleasant-ly inane and sinister tunes....Imagine Sisters of Mercy collaborating with Link Wray and Martin Denny. Now get yourself a margarita and shake that money-maker." -Now Magazine

Irreverent Toronto quintet came up with the absolutely brilliant idea of fusing the beach-and-bikinis vibe of '5Os and '6Os surf music with the evil-and-eye shadow vibe of '5OS Goth culture. The story of Vampire Beach Babes' success begins with the underground hit Gothic Surf-A-Rama, which appeared on the Gothic Sanctuary compilation and was later released on the band's first CD Reckless Summer. The band has found success south of the border as well, landing a Halloween showcase at the legendary CBGB club in New York City. VBB was also tapped by Troma Entertainment - the studio that produces trash classics like The Toxic Avenger, Sgt. Kabukiman, NYPD and Fat Guy Goes Nutzoid- to write and perform the theme song for the forth-coming Troma epic, Tales From The Crapper. .... sounds like the B-52s crossed with The Cramps. - Canadian Music Network

A Curious marriage of Goth, surf-punk, rockabilly leather, PVC and sunscreen...these weirdoes throwin' a beach party that would leave Frankie and Annette buried in the sand....Twisted and comical but not just a shtick, these babes have talent and a sense of humor, making this a perfect way to celebrate summer and still maintain your gothic ennui.
-Coreen Woianski -Exclaim!

ON BARON MARCUS
"How can a vampire so ancient and powerful be so daft - it's just embarrassing!"
-Lord Emperor of the Vampire Nation

Foppish and aristocratic, Baron Marcus loves to indulge in the fineries of decadent bygone eras. A vampire who is ancient beyond calculation, he appears not to use any powers bestowed upon him except for his very un-vampire-like fondness for sunshine - which he flaunts while tanning on the beach. Baron Marcus has a deep love and respect for human kind and is dedicated to the simple desire for everyone (vampire and human) to get along and have a good time. Of course, his innocent optimism is in great contrast to the dark intrigues that surround the adventures of the VBB.

"I have no idea what the hell he is boss - he, he's like a bloody daywalker on Prozac!!!"
- High Order Sabbat operative

A legend has it that Baron Marcus originated from some Acadian plane of existence called 'Beach One' and his adventures are his journey in a quest to return home. Whatever the truth behind this ancient quirky and benevolent creature, he seems primarily occupied with everyone having a good time.

The Devilman himself was forced into becoming a member of the Vampire Beach Babes when he unwittingly tried to steal the bands immortal souls in a drag-race down at Hot Rod Beach. Of course, he was not aware that Baron Marcus (who was driving the band hearse that day) had 'horseshoes up his ass' (a condition that results in extraordinarily good luck - despite the discomfort)...

Down at Hot Rod Beach...

The Baron says to the band
Don't worry about our hearse
We've already crossed the finish line
'twas accidentally in reverse...

So,the impossible happened, and this Devilman they call 'Trouble' lost the drag race resulting in his being bound to the VBB in eternal service.

So a torture far worse than any hell befell this poor devil. The best he can do is cringe and groan when Baron Marcus and Boa play patty-cake...yet again.