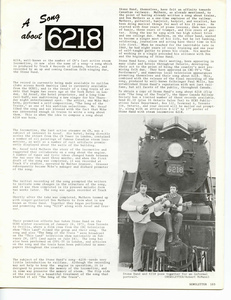 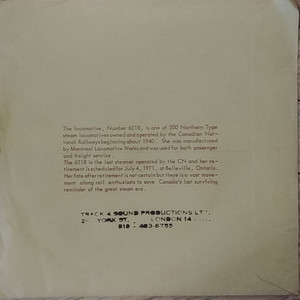 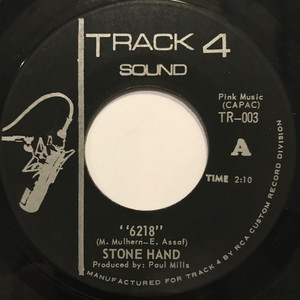 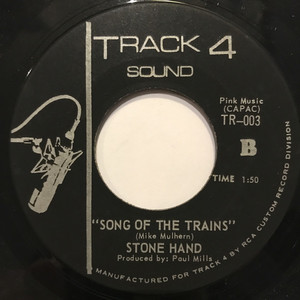 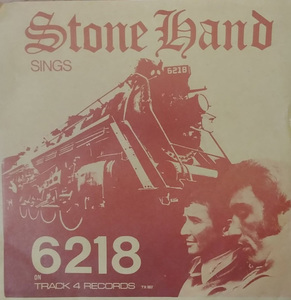 6218, well-known as the number of CN's last active steam locomotives, now also the name of a song - a song which is produced by Track 4 Records of London, Ontario, and recorded by an up-and-coming Canadian folk-singing duo, the Stone Hand. The record is currently being made available to railfan clubs across North America (and is currently available from the UCRS) and is the result of a long train of events that began two years ago at the York Hotel in London. Ed Assaf, the hotel proprietor, and a long-time rail-buff, was auditioning a new singer for his Thursday night entertainment spot. The artist, one Mike Mulhern, performed a self-composition, "The Song of the Trains, " as one of his audition selections. Mr. Assaf liked the song and was pleased with the fact that Mike was interested enough in trains to write a song about them. This is when the idea to compose a song about 6218 was born.

The locomotive, the last active steamer on CN, was a subject of interest to Assaf. His hotel, being directly across the street from the CN Tower in London, contained a number of oil paintings of famous Canadian steam locomotives, as well as a number of rail artifacts prominently displayed about the wall s o f the building. Mr. Assaf told Mulhern the story of the locomotive and suggested they collaborate on a song about the engine. A number of tunes and lyric ideas changed hands between the two over the next three months, and when the first draft of the song was completed, it was recorded at Track 4's studios, operated by Walter Crasser. Crasser subsequently became Mike' s manager and diehard promoter of the song. The initial recording of the song prompted the writers to initiate some changes in the structure of the song, and it was then completed in its present melodic form two weeks later. The song was again recorded at Track 4. Shortly after the take was completed, Mulhern teamed up with singer-guitarist Don Mathers to form what is now known as Stone Hand. Together they began performing and promoting the song "6218" along with Assaf and Crasser. Their promotion efforts have taken Stone Hand on the UCRS winter excursion of January 24, 1971, from Toronto to Orillia, where a film crew from the CBC television show "This Land" filmed the group and their song. The song and also "The Song of the Train " were broadcast on the "This Land" television show nationally on February 24, 1971 (and again on July 14). The song has also been performed on CFPL-TV in London, and article s on the song and the train have been published in newspapers throughout the country. The subject of the Stone Hand's song “6218” needs very little introduction to railfans. Although the recording may not help to keep the engine in operation, it is designed to preserve the memory of the locomotive, and in some way preserve the memory of steam. The flipside of the record is a beautiful treatment of the song that started it all "The Song of the Train".

Stone Hand, themselves, have felt an affinity towards Canadian railways. Mulhern, as already mentioned, to the point of having already written a song about trains, and Don Mather s as a one-time employee of the railway. Mathers - guitarist, banjoist, harpist, and vocalist, has been doing musical things for most of his 23 years. He started with four years of pian o lessons, then two years of banjo, three years of trumpet, and five years of guitar. Along the way he sang with two high school trio s and one college duo. Mulhern, on the other hand, wanted to become a singer most of his life, but he let banking, soldiering, journalism and acting have their time in his life first. When he reached for the inevitable late i n 1969, he had eight years of vocal training and one year of self-taught guitar to press his claim. Si x months of working as a single precede d his alliance with Don and the beginning of Stone Hand. Stone Hand have, since their meeting, been appearing in many clubs and hotel s throughout Ontario, developing their act to the point of being the country' s most promising folk duo. They have appeared on CBC-TV's "The Performers", and numerous local television appearances promoting themselves and their song about 6218. This, combined with the release of the final recording of the song, produce d by well-known folksinger Pau l Mills, has established Stone Hand's reputation with not just rail - fans, but al l facet s o f the public, throughout Canada. To obtain a copy of Stone Hand's song about 6218 (flipside "The Song of the Train"), the Upper Canada Railway Society has a limited number of these records available. Send $1.19 (plus 58 Ontario Sales Tax) to UCRS Publications Sales Department, Box 122, Termina l A, Toronto 116, Ontario, and you r record will be mailed out promptly, along with an attractive 8-1/2" by 17" poster of Stone Hand with steam locomotive 6218.