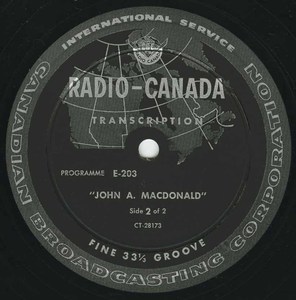 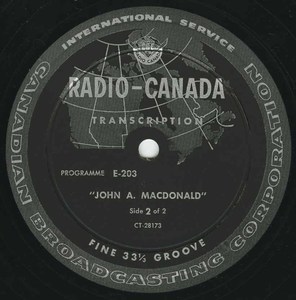 Writers of Canada 8: John A. MacDonald

Born in Toronto, the son of Methodist minister, Creighton attended Victoria College, in the University of Toronto, where he received his BA in 1925. He then attended Balliol College at Oxford University, where he received his MA before returning to Canada to teach history, at the University of Toronto, where he remained for his career. Creighton belonged to a generation of English Canadians who were proud of the British Empire, and his anglophilia was often expressed in his books. In 1926, Creighton married Luella Bruce. He was the father of the fiction writer Cynthia Flood. Creighton died in his sleep on December 18, 1979, from cancer, in Brooklin, Ontario. He was 77.

In 1967, Creighton was made a Companion of the Order of Canada.

University of New Brunswick political science professor Donald A. Wright is writing a biography about Creighton.

Creighton was heavily influenced by Harold Innis and took an economic approach to Canadian history. His significant contribution to the field was the development of the Laurentian Thesis, which described the basis of Canadian history through geography and the nation's dependence on its major centres. Creighton's first works were studies in the Rebellion of 1837-38 in Lower Canada, which Creighton believed to the product of the clash between the economic traditionalism of French Canada and the relentless drive of the Anglo business elite of Montreal. In turn, this led Creighton to the study of that elite, and hence into the study of the St. Lawrence in Canadian history. In The Commercial Empire of the St. Lawrence, Creighton argued that the economic potential of the St. Lawrence system inspired successive generations of adventurers, explorers and businessmen to try to link the vast natural resources of the interior of North America with Europe. Despite heroic efforts, the dream of the St. Lawrence failed to come to life as too many impenetrable portions of the river meant it could not live up to its potential, and the development of the railroad system in the U.S. proved to be more economical. Creighton was well known for arguing that the "natural" basis of trade in Canada ran east-west rather than north-south. In Creighton's view, the failure of commercial elites to properly develop the St. Lawrence is what led to Confederation. Creighton argued that since impassable waterfalls and rapids prevented an economic empire from being built, Canadian elites embraced a political empire, namely Confederation as a consolation prize. The theme of Confederation as a poor substitute for an economic empire was underlined in The Road To Confederation and Creighton's biography of Macdonald.

Creighton's two most important works are The Commercial Empire of the St. Lawrence (1937) and his two volume biography of Sir John A. Macdonald entitled the Young Politician and the Old Chieftain. Creighton's biography of Macdonald is often considered to be an excellent example of idealist history as developed by R. G. Collingwood, who was a major influence on Creighton. Both volumes won the Governor General's Award for Best Non-fiction book in 1952 and 1955, were major best-sellers, and were credited with creating a major reassessment of Macdonald's role in Canadian history. In Creighton's view, Macdonald sought Confederation as way of bringing to life the political St. Lawrence empire.

Creighton saw history as a literary art, and rejected calls for history to be seen as social science. Creighton was famous for spending as much time crafting his prose as he did in research, and Creighton often claimed that the best historical work should read like a well-written novel. Creighton disliked what he called "fat funereal volumes" of unreadable biographies, and argued that well-written books should be the historian's objective. Besides Collingwood, Creighton’s major influences were James Anthony Froude, G.M. Trevelyan, Edward Gibbon, and A. J. P. Taylor.

Creighton's vision of Canadian history was ultimately a deeply pessimistic and tragic one as he felt Canada had the potential to be the world’s greatest country if only Canadians would follow the vision of the Fathers of Confederation, especially Macdonald's. In his view, most Canadian leaders had sadly chosen to neglect that vision and had instead allowed Canada’s potential to needlessly squandered. The only leaders who merited the description of statesmen were Macdonald and Borden. According to Creighton, Macdonald’s time in office was Canada’s Golden Age and without the exception of Borden every leader who came after Macdonald had allowed Canada to deteriorate. Thus for Creighton, Canadian history after 1891 was for the most part the story of missed opportunities, thwarted ambition, and hopes scattered as the dream that was Canada was slowly allowed to unravel.

Through Creighton normally tried to maintain a formal and cold pose, he was well known for his outspoken and passionate nature. His eruptions of rage led his publisher John Gray to call him "the terrible-tempered Mr. Bang". Creighton often engaged in feuds with historians whose interpretations he disliked, but he was well known as a kind-hearted and munificent professor towards his students, albeit one who was severe with those who engaged in work that Creighton thought was wrong-headed. He made no effort at objectivity and was openly subjective and partisan in regards to his likes and dislikes. Creighton was fond of contrasting Canada’s participation in World War I and World War II. In Creighton’s view, Sir Robert Borden was a tough and able leader who, despite initial mistakes and missteps, was able to fully mobilize Canada and ensure that Canada contributed disproportionately to the Allied victory in 1918. Borden took the necessary steps to win the war despite the unpopularity of many of his measures. Creighton saw the rest of Canadian history as one long slide, which he largely blamed on the Liberal Party. In contrast, Creighton saw William Lyon Mackenzie King as a weak and indecisive figure who was more concerned with safeguarding the electoral fortunes of the Liberals then winning the war, and who kept Canadian troops out of combat as long as possible to avoid making difficult decisions on conscription. In Creighton’s opinion, thanks to Mackenzie King, Canada did not play as a large share as possible in the Allied victory.

Creighton was regarded by many as the foremost historian of his day and his influence is still strongly felt. An excellent writer and story-teller, his books commanded wide public attention. Many of Canada's top historians studied under Creighton, such as Ramsay Cook and Michael Bliss. Creighton's view of Canadian history is still often studied. He helped initiate The Canadian Centenary Series, a nineteen volume history of Canada, and served as its advisory editor. His book, The Forked Road: Canada, 1939-1957, was part of The Canadian Centenary Series.

In later years, Creighton frequently expressed himself through the mass media. An intense Canadian nationalist, his opinions have often been criticized, particularly by those, such as historian Susan Mann, who saw Creighton as anti-Quebec. Creighton felt that the position of the French language in Canada should be more or less what the British North America Act had prescribed. As such, Creighton was not enamored with changes such as official bilingualism that was introduced in the 1960s and 1970s. A strong supporter of the Progressive Conservatives and small "c" conservative, Creighton's heroes were Macdonald, Robert Borden, and John Diefenbaker, for whom Creighton served as a speech writer. Likewise, Creighton was proud of Canada's British past, and regarded efforts to erase that past as a national disgrace.

In his later years, Creighton moved towards the left and he was regarded as an Red Tory by the time of his death.
Creighton detested the Liberal Party as he saw the Liberals as the party of continentalism (i.e. moving Canada closer to the United States) and for taking steps that Creighton saw as an attack on Canada's British heritage, such as replacing the Canadian Red Ensign with the Maple Leaf flag in 1965. Of the all the Liberal leaders, it was Lester Pearson who Creighton disliked the most. In regard to federal-provincial relations, Creighton shared Macdonald’s view of a highly centralized confederation with the provinces subservient to the federal government. In Creighton’s opinion, it had been a great mistake on Ottawa’s part to allow the growth of provincial powers in the 20th century. In particular, Creighton was strongly opposed to the demands made by the Quebec government for more power at the expense of the federal government during the Quiet Revolution and afterwards. Creighton saw this as the first steps towards separatism.

Creighton's determination to maintain British traditions, his close association with Diefenbaker, and his dislike of continentalism led him to be accused of anti-Americanism. Later, Creighton cemented his reputation for anti-American views with his only novel, 1978's The Take-Over. As its title implies, the book dealt with an imaginary U.S. take-over of Canada. Creighton saw himself as a lonely crusader not only against what he called the "Authorized Version" of Canadian history (i.e., the Liberal interpretation), but also against what he regarded as the widespread indifference and apathy felt by most Canadians towards their history. In Creighton's view, the so-called "Liberal Interpretation" of Canadian history would ultimately led to Canada being absorbed into the United States. Creighton frequently proclaimed his belief that a people who forget their past are also doomed not to have a future. Throughout his life, Creighton struggled hard to raise the profile of history in Canadian life, and to convince Canadians that they had a grand and glorious history worth celebrating.