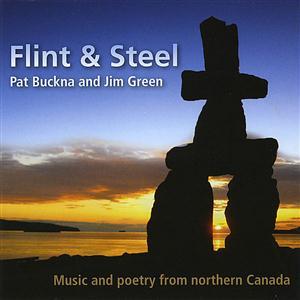 Flint and Steel: Poetry and Music from the Northwest Territories (re-issue)

Pat Buckna and Jim Green began their collaboration in Fort Smith in 1982. The compositions took shape in a neighbour’s garage where Pat composed and recorded music to compliment Jim’s remarkable voice and images of contemporary northern life. Jim had lived in several communities in the north, from the Arctic Coast to the MacKenzie Valley. In 1976, he published his first volume of poetry, North Book, which won two awards for excellence. His second book, Beyond Here, was published in 1983. Jim’s poetry has appeared in numerous anthologies and literary journals and he has performed his work in every province and territory of the country.

1984 was also Yellowknife’s 50th Anniversary Homecoming. Pat was president of the Northern Arts and Cultural Centre (NACC) and artistic director of the Folk on the Rocks music festival. The following year he was chosen to perform on and produce The Yellowknife Album, a celebration of music, songs and poetry written and performed by Yellownife artists. In 1986 he produced the NWT cultural presentation at Expo ’86 in Vancouver which included over 750 northern artists, musician and cultural presenters.

Jim’s storytelling combines humor with his keen sense of observation, and an understanding of the North and those who call the North their home. Pat’s music adds other dimensions to Jim’s words, a blend they call wordsongs.

The Canada Council recognized their unique vision by awarding them an Explorations Grant to record the master tape of Flint & Steel, originally issued on Jamadam Records, at that time the only record label in the Northwest Territories.