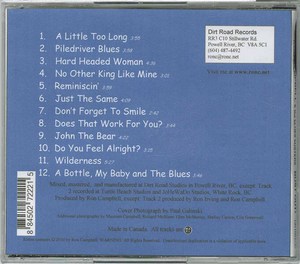 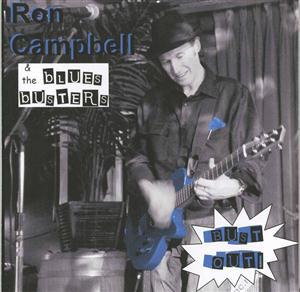 Ron Campbell (guitarist, songwriter): "The Blues encompasses so many different styles; on this album I wanted to explore them all. Mainly, the bLUES bUSTERS play straight-ahead blues/rock - like Hard Headed Woman - but we've also included lots of surprises; A Little Too Long has a country influence; Piledriver Blues is Delta-style with lots of slide Dobro; No Other King Like Mine is pure Gospel with a 12-piece choir backing up Glyn Evans' soulful vocals; Reminiscin' and A Bottle, My Baby and The Blues are quite jazzy; Does That Work For You is a funk groove; Just The Same is classic Chicago-style slow blues; and John The Bear is an acoustic folk-influenced story song, based on the exploits of a famous bank robber in the 1930s, but I've given the tale a surprise ending with a unique Canadian twist. There's even one hard rock song - Do You Feel Alright - where I get to do a bit of guitar shredding. An eclectic bunch of tunes, but all based on The Blues. I hope you like it!"

"Bust Out!" is what I like to call an Anticipatory Album, which means it is an Album of such uniquely diverseness, that the first time you listen to it, you find more and more anticipation building for the next Track. A T-Rex Special with every song sounding the same, this Album is not. I highly recommend you give Ron Campbell & The Blues Busters "Bust Out!" a try... I don't think you will be disappointed, in the least. A fine Album to slip into the mix when having a party, people will take notice...Favorite Track... "Piledriver Blues"
-John Vermilyea, Blues Underground Network

...Bust Out! is a rollicking and rowdy blues-rock album that sticks to the basics but also knows how to stretch its wings and experiment a little. There's some folk-blues in the mix, along with a little funk, jazz, gospel and a smattering of country, all performed with the Campbell touch. The lyrics and raucous nature of A Little Too Long set the tone for a down-home album that really goes back to the basics of blues and all its influences ... A highlight of the album is Reminiscin', a light, playful walking blues, itself reminiscent of Les Paul or Chet Atkins. Campbell's talent as a guitar player shines on the track, which features some great old-school licks and real sweet tone. ... John The Bear is a tight folk-blues track with a harmonized, Crosby, Stills and Nash-esque singalong-worthy chorus and soaring acoustic accompaniment. Ron Campbell delivers the blues.
Kyle Wells, Powell River Peak, September 2010

...A Little Too Long has the catchiest hook you'll find anywhere, anytime. It's a stunner!'
Don Morberg, Calgary journalist, July 2010