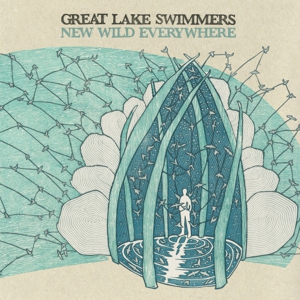 In a press release, lead singer/songwriter Tony Dekker explained, “There is something very elemental about this album as a whole. We wanted to try something new, expand our horizons and flex a bit of the creative muscle we’ve built up through years of touring. It came as a bit of surprise how well we functioned as a band in that environment. We were about to focus completely on the songs, rather than the logistical obstacles of waiting for the boat to dock or the rain to stop.”

From the quick tempo of “Easy Come Easy Go” comes a controlled chaos that fluidly merges into the lone “Fields of Progeny,” while “Ballad Of A Fisherman’s Wife” plucks on with an ode to the families affected by the BP oil spill. “Changes With The Wind” explore the wild within with reflective lyrics, “made of fire and desire, turns like a wheel, changes with the wind.”

True to form, Great Lake Swimmers’ field recording off New Wild Everywhere emerges with track “The Great Exhale.” Recorded in an abandoned Toronto subway station in the late hours of the morning, the band set up studio.

Producer Andy Magffin says of the process, “It was bleak. I could not tell if the recording was any good, because our playback system was nearly useless in the echoing, cavernous tunnel. When we finally listened to the results, we were amazed to hear how beautifully the song fit with the other album tracks. Somehow, Great Lake Swimmers sound just like they should no matter what tools they’re using or how far they get from civilization.”
-pastemagazine