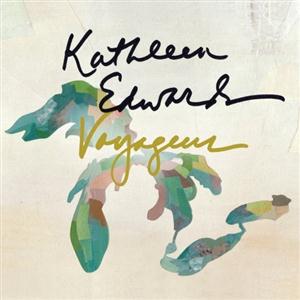 There are two parts to a break up. There is, of course, the actual break up, which is the part that tends to get all the press — it is, after all, the more obvious half of the equation, and it has a lot more potential for fireworks. But the part that really hurts, when you get down to it, is the other half: the letting go.

The best documents we have about the relatively modern condition of splitting up are the ones that nail that half of the equation. Think of, say, Eternal Sunshine of the Spotless Mind, the desperation with which Jim Carrey tries to cling to the disappearing memories of dating Kate Winslet: it hits home precisely because we all have to go through that painful process of deletion — that forgetting of feeling, if not detail — so we can move on. The initial separation, comparatively, is easy: it’s the thousand little separations after, from changing routines to changing memories, that’s the tricky part.

That seems to be a truth that, if Kathleen Edwards didn’t know before she wrote Voyageur, she figured out during its creation. Written and recorded after her marriage ended — I am contractually obligated to point out here that her new boyfriend is Bon Iver’s Justin Vernon, who also produced Voyageur — it is a wounded album, never exactly bitter or mournful, but certainly tangled and tearing through a mess of lingering feeling.

Maybe that’s best exemplified in the first and last songs here, Empty Threat and For the Record, respectively. The first is a bright, open number, pushing Edwards’ singer-songwriting leanings into the pop music sun, but the music hopefulness is tinged with a recognition that moving on totally seems like a bit of a pipe dream. After a detailed list of little annoyances, Edwards promises she’s “Moving to America,” before she admits with a near-audible shake of the head, “It’s an empty threat.”

She promises herself at the end of the song it’s not an empty threat, but the rest of the album seems to put the lie to that, coming to a climax on For the Record, a song that plainly longs to be done with its subject and equally as plainly can’t even come close. After a minute of a piano line and drum beat that are trying to play it cool while oozing a laconic contempt, she opens the song with “My blood is thick / but it still runs,” which seems a pretty perfect summation of how it feels to try to get rid of someone who used to mean a lot to you. Of course, it’s balanced by the chorus, which implies this something far more than a detente: “Hang me up on your cross / For the record, I only wanted to sing songs.”

That may be the best example, but this record is full to bursting with the kind of subtle emotional push-and-pull that can come from despising someone you know intimately. Comedian/Chameleon is downright Albeean in the way undercurrents of tension are laid bare, though Edwards at least doesn’t let herself off the hook. Pink Champagne is a slow-burning catalog of a marriage that very much seems doomed from the start, its inevitability only recognized in retrospect and offering no comfort now that it’s over. It’s also one of the finer songs here, its emotional landscape blanketed with a fog of helplessness, the sadness doubled by the fact not only couldn’t it have been any other way, but you wouldn’t necessarily want it to.

For all its emotional depth, though, Voyageur is a bit held back by a musical style struggling to get free as hard as Edwards herself is. Though this is certainly a step away from her impeccable singer/songwriter history, it still sticks close, with its forays into wider sounds sometimes muddling the whole (Chameleon/Comedian, for instance, even for its psychological knottiness, gets stuck in a kind of middle ground between stripped-down acoustics and pop hookiness, lacking the strengths of either). That is maybe to be expected on the first try, though: it is, after all, hard to move on from anything.
-David Berry, National Post