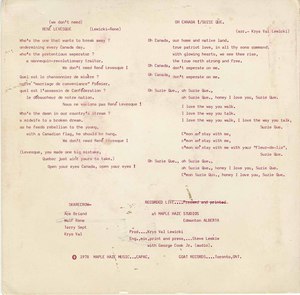 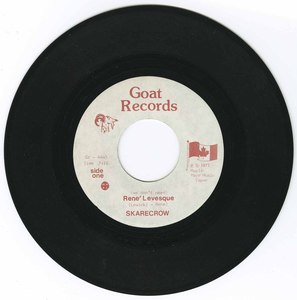 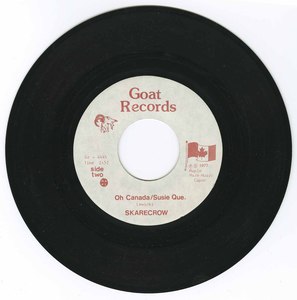 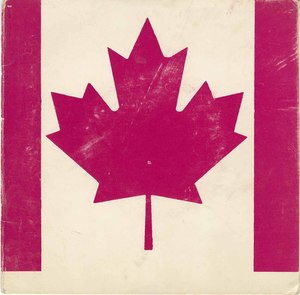 The lyrics of the song intrigued me, and after reading a short blurb on The Nova Scotia Classic Rock website about how it was banned by the RCMP, I managed to get a hold of one of the two surviving members of the 1970’s band Skarecrow, through their manager Mary Brown (Bridgewater, Nova Scotia), (no relation to the deep-fried chicken franchise). Krys Val Lewicki and I talked for about half an hour or so and I jotted down what I could. One thing about Krys, the writer of the song “(We Don’t Need) Rene Levesque”, he is as nationalistic as they come. He is a patriot and is very proud to live in such a great country as Canada, I guess this is why he was so inspired in 1977, at the peak of Quebec nationalism, to write a song which was banned by the Canadian government.

the track is available for download on www.mocm.ca here: http://mocm.ca/Music/Title.aspx?TitleId=316198

George, Krys, Ace and Wolf brought in Sudbury drummer Moe Leblanc and became “Skarecrow” (as they said on a Halifax radio interview, “…to be out–standing in their field”). The first single on their indie record label Goat Records GR 4444 was ….“Wrong This Time” b/w “4 Minutes After 9”… (As listed by) Skarecrow

In 1977, a year before Skarecrow had gotten around to recording the Rene Levesque single, they headed up to Yellowknife, NWT, to record their first album, on Goat Records MH 7800….“Blues…Live At the Explorer”. It was a miscommunication which led to the 2LP format. They were supposed to only record an LP of live tracks, but instead, all 20 tracks including demos were pressed. The album was sought out by collectors looking for that raw blues Canadian sound.

You can hear the album here: http://mocm.ca/Music/Title.aspx?TitleId=300758

As the 70’s ended and the 80’s began, Skarecrow was shown in the new band section of CIRCUS magazine, (featuring Keith Richards on the cover and introducing KISS). 1981, found Krys working with Art Snider (music director-“The Tommy Hunter Show”) in Toronto. Together they produced a few minor chart dents on Art`s Topaz Records including … “Moose Jaw Breakdown” b/w “Country Wine” … (As listed by) Skarecrow

Here are the lyrics:

Who's the one that wants to break away?
undermining every Canada Day
who's the pretentious seperator?
a mannequin-revolutionary traitor
We don't need Rene Levesque!

Who's the damn in our country's stream?
a midwife to a broken dream.
and he feeds rebellion to the young,
with a Canadian flag, he should be hung.
We don't Rene Levesque!

(Levesque, you made one big mistake,
Quebec just ain't yours to take.)
Open your eyes Canada, open your eyes!