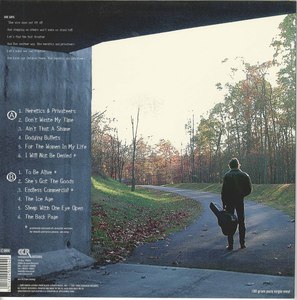 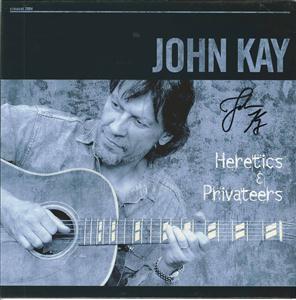 In 2000, Crosscut Records in Germany released John Kay's solo album "Heretics & Privateers" on 180 gram pure virgin vinyl. John Kay obtained the last 16 copies on the planet and has autographed them! This collectible, when sold out, will never be available again.

"It was liberating to make an album without concerns about mass acceptance," John Kay says of his rootsy, socially conscious new solo project Heretics and Privateers. "These songs are a reflection of what matters to me at this point in my life," states the artist, "and it's my hope that these songs will strike a chord with some like-minded souls."

The musical subtlety and emotional depth of the album's 12 original compositions may come as a bit of a surprise to those familiar with Kay's work with Steppenwolf, the seminal, hard-rocking combo that the singer/songwriter/guitarist has led for more than three decades. But while Steppenwolf is best known for aggressive manifestos like "Born to Be Wild," "Magic Carpet Ride" and "Rock Me," Heretics and Privateers' lyrics are consistent with the streak of idealism that's been prominent in such Steppenwolf tunes as the anti-drug anthem "The Pusher" and the environmental ode "The Ostrich," and on the band's ambitious 1969 concept album Monster. Throughout Steppenwolf's lengthy career, and on Kay's three prior solo releases, the artist's approach has remained deeply rooted in the blues and folk fundamentals that provide the foundation for his provocative, articulate new songs.

Heretics and Privateers offers a gritty view of contemporary life, surveying the human toll of institutional callousness with unflinching clarity. Kay, whose evocative growl is one of rock's most distinctive voices, offers some of the most heartfelt performances of his career on such stark numbers as "Ain't That A Shame" and "The Ice Age," which movingly lament the erosion of everyday compassion. Elsewhere, "Dodging Bullets" and "I Will Not Be Denied" examine the plight of ordinary people doing their best to survive within a system that seems stacked against them, while "Endless Commercial" takes aim at the media manipulation the drives consumer culture, and "Sleep with One Eye Open" delineates the inevitable violent results of societal inequity. Despite the songs' unsparing insights, their darker implications are frequently balanced by biting humor, as exemplified by "Don't Waste My Time" and "She's Got the Goods."

Kay's topical lyrics aren't the posturing of a pampered rock star or the gripes of a chronic malcontent, but the deeply felt observations of a first-generation American whose appreciation of his adopted country's promise and potential is balanced by an awareness of its lapses. "For the most part, these songs are simply saying 'We can do better than this,'" Kay states. "I'm an American by choice, and I'm in love with the idea of America, but I don't feel that we've made enough of an effort to reach our potential as a society and as a culture."

The veteran artist's longstanding empathy for the underdog was instilled by his own early experiences. Born Joachim Fritz Krauledat in 1944 in the section of Germany then known as East Prussia, Kay never knew his father, who was killed fighting in Russia. When John was less than a year old, he and his mother fled to what would soon become Communist-controlled East Germany. Mother and child subsequently undertook a perilous midnight escape into West Germany, where John soon developed an abiding fascination for American music, and for America's implicit promise of freedom and justice.

"When I first heard rock 'n' roll as a young boy, I didn't speak a word of English," Kay recalls. "I couldn't understand what they were singing about, but it sent goose bumps down my spine, because I connected with that joy and exuberance. After my family emigrated to Toronto and I learned the language, I gravitated to music with lyrics that I could relate to, and at the time that meant folk and blues."

After arriving in North America, Kay took up music himself, playing acoustic blues throughout Canada and the U.S. as an
itinerant solo performer. In 1965, he returned to Toronto and joined the locally popular combo The Sparrow, which relocated to California and eventually broke up, setting the stage for Kay's 1967 formation of Steppenwolf. In the years since, theband has built an impressive body of edgy, uncompromising rock 'n' roll, balancing sonic toughness with a more thoughtful lyrical stance that's questioned mainstream values and counterculture platitudes alike. With its worldwide record sales in the tens of millions, the band's classic albums remain timeless fixtures on radio, television and in motion pictures. Supported by a loyal international fan base, Steppenwolf remains a busy touring and recording act to this day. But, while John Kay is proud of Steppenwolf's achievements and eager for his band to take on new challenges, at the moment his thoughts are focused firmly on Heretics and Privateers.

On both the album's title track, which pays tribute to those among us who reject society's proscribed roles in favor of more humane value systems, and the spare, acoustic closing track "The Back Page," which celebrates those whose everyday acts of kindness demonstrate the human race's capacity for selflessness, Kay's ultimate sense of hope and faith in humanity shines through.

"Despite the frustration and dissatisfaction expressed in some of these songs, nothing encapsulates my feelings about these subjects and about my fellow human beings more than 'The Back Page,'" he asserts. "I'm in awe of the decency and commitment of the countless people who, in spite of all the temptations and distractions, find it within themselves to care about something beyond their own self-interest. At a time when the 'I've got mine, the rest of you are on your own' attitude has been officially sanctioned, it's downright inspiring to see anyone stand to fight the Good Fight. Whether it's the global actions of Green Peace, Doctors Without Borders and the like, or people reaching out to their neighbors here at home, it's their example that keeps me from sliding into cynicism. I certainly don't have any illusions that this record will change the world, but over the years I've learned that music sometimes offers support and solace, making the harshness of everyday reality a bit easier to bear. And if these songs should manage that, it would be enough for me."

"This album came together in its own time and in a natural way," Kay explains. "As I was writing these songs, it dawned on me that I was drawing on the same sources that first inspired me in my youth. More than I had realized, blues men like Son House and folk writers like Tom Paxton had left their mark on me, and I tapped into those influences with this record."

"Lyrics, it's all in the lyrics. Aptly named, "Heretics & Privateers" is an anthem that speaks to the mass of disenfranchised Americans who would rather step away from the treadmill of cookie cutter conformity and explore life on their own terms. Weaving a tapestry of rock, blues, and folk, John Kay is a lyricist with the uncanny ability to formulate his personal revelations into clear and evocative statements." "His razor wit cuts big government and the huge corporate machine down to size and strips bare their greedy motives, bulldozer mentality and continuous commercial brainwashing." "John's voice is strong and powerful, the edge in his voice is perfect for the love, angst, insight, and chastisement he delivers. A meaningful and powerful statement, "Heretics and Privateers" is a forceful social commentary too strong to be ignored."
-Stephen T. Davidson, Blues On Stage

"Yes, he should now sit at the table with Dylan, Springsteen and Townes Van Zandt- he could play these songs for Woody Guthrie and he would nod knowingly"
-Frank Matheis, Music Writer and Radio Producer