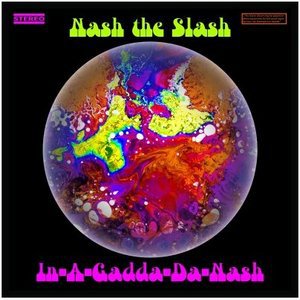 Elegantly tuxedoed like Cary Grant in George Cukor’s Holiday and hideously bandaged like Claude Rains in James Whale’s The Invisible Man, the revered and reviled serial sonic psychotron known as Nash The Slash has been number one in a field of one ever since he first began creating his own insidious sound of music from deep within secreted studio walls located somewhere inside of an abandoned subway station miles beneath the filthy sidewalks of Toronto.

Armed only with a Strickfaden array of hyper-amped violins, mandolins, synths and drum machines, Nash proceeded to unleash upon an unsuspecting society a senses-shattering series of aural album assaults whose titles said it all: Bedside Companion. Dreams And Nightmares. Decomposing. Children Of The Night.

These unreasonably unrelenting records led to Nash being smuggled into Europe to work with the likes of Gary Numan and Bill Nelson, only to be abruptly expelled from the continent by the EU as "a deviant influence not only on humanity but on all life itself" after angry villagers caught a rare glimpse of his grisly ungauzed visage late one night in an iniquitous den of ill repute on the Rue Morgue.

Safely ensconced back home in his underground lair, Nash donned his stained leather apron and threw himself into his work with a renewed vengeance born of righteous anger that would ultimately be made manifest in the records which were to follow: the corrupt social commentary on And You Thought You Were Normal; the modern urban brutality of Thrash; the silent cinema soundtrack to Nosferatu; and his first ever album of cover versions, American BandAges.

Now the Slasher strikes again with an even greater new record of covers that extends from the obvious (Baba O’Riley and Astronomy Domine) to the obscure (Follow The Leaders and Constantinople) to the omnipresent (In-A-Gadda-Da-Vida and The Wreck Of The Edmund Fitzgerald). So don’t be an angry villager: buy it now!
-Jeff Morgan, from Jeff Morgan's Media Blackout #165.