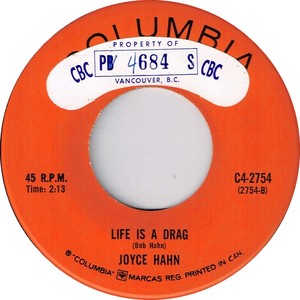 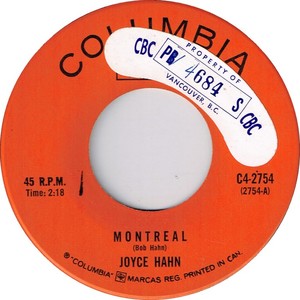 Montreal b/w Life is a Drag

Born on January 31, 1929 in Eatonia, Saskatchewan (near Saskatoon), petite (at her peak she stood 4'11" and weighed about 90 pounds) Joyce Hahn was one of the mainstays on Canadian television (CBC) during the 1950s, most particularly The Cross-Canada Hit Parade which she co-hosted out of Toronto from 1955 to 1960 with Canadian singer Wally Koster. In style and vocal range she was very similar to Teresa Brewer and in 1956 began recording for the London, Ontario-based Sparton Records with her initial release being Why Should I? b/w You've Got The Love as Sparton 220R in February. Two months later, in April, came the follow-up (The Kind Of) Girl For Joe b/w I Was Wrong as Sparton 259R. Both had the backing of the Art Morrow orchestra.

Her popularity in Canada caught the attention of Archie Bleyer at Cadence Records in the U.S., and in October that label, with the backing of Bleyer's orchestra released The Grass Was Greener b/w I Gotta Know as Cadence 1298 (in Canada it was released as Sparton 346R). It failed to make the U.S. national listings, but again did well enough in both countries to lead to the May 1957 cover of the Marvin Rainwater hit, Gonna Find Me A Bluebird, and in June it became her only nationally-charting single in the U.S. when it peaked at # 84 Billboard Pop Top 100 b/w I Saw You, I Saw You (again with Bleyer backing) as Cadence 1318 (Sparton 435R in Canada).

She never did cut an album and finding any of her music today in CD format - even her one U.S. charting single - is so far impossible. All we have are these scattered 45-rpm discs.
-George O'Leary