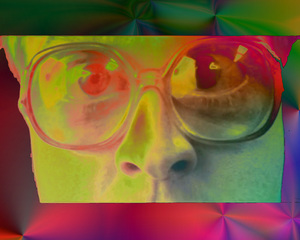 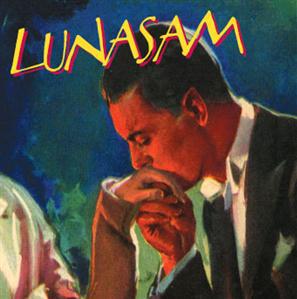 Lunasam, a rock trio from Quebec City, presents its self-titled debut CD. Produced entirely by the band and two years in the making, this debut contains 17 songs with over 75 minutes of music filled with psychedelic electric guitars and hypnotic analog synths where vampires and car accidents are recurring themes. Lyrics are ironic and pernicious, yet hopeful and upbeat. Three poems from early lesser-known French surrealists Robert Desnos, Benjamin Péret and Pierre Gripari were put into music. The CD booklet provides lyrics (half the songs are in English, the other half in French) along with illustrations by band leader and producer Robert along with photography by Daniel Pelletier. Lunasam the CD is a work of feverish intensity: 15 software projects just for the guitar solos in the song “Butterfly”, 62 different versions of “Propriétaire”, 164 tracks for “Boucane sur le fleuve”, 140 songs initially recorded for the CD. The musical styles vary widely from track to track and each song is mixed with the goal to make it sound unique and bring out its own magic. The CD initially comes across like a brilliant compilation of different bands rather than the work of a single unit, much less a trio, even though augmented by three female guest vocalists.

The youngest member, Robert, plays rhythm guitar and is the genius behind the unearthly keyboard solos that spiral into the ether. He’s also the one who is rumored to sing certain tracks as Count Downe, a melancholic 400 year-old vampire who hungers to do Cream covers. The hefty guitar, lap steel and balalaika solos throughout the CD are by Denis, who brings his blues and psychedelic rock sensibilities to a decidedly modern sound. Bertrand plays keyboards, arranges and mixes, and tames the wild computers used in the recording.

The songs
1. Constantly segueing from one meaning of the French word "diable" to the other, the song ‘Diable Depot ®’ therefore alternately translates to ‘Devil Depot’ or ‘Trolley Depot’, an infinitely vast warehouse store selling both useful transport tools and eternal damnation. There's a never-ending fire sale, a 200 square mile parking lot with six free spaces left and long lines like you wouldn't believe leading to the cash registers of the Beast.

2. ‘World of pain’, a standard off the Cream album ‘Disraeli Gears’, was in fact written by Mountain bassist Felix Papalardi and his wife, who (accidentally, she claims) murdered him by gunfire some time later: this bit of trivia was unknown to the band members until after the CD was completed. In Lunasam’s version of the song, Count Downe, like a modern-day serial killer, happily contemplates his contribution to crime in the city as he stalks his next prey. (Hopefully that will not chill your blood too much).

3. ‘Cosmo maman insiste toujours’ (Cosmo Mama always insists), where singer Marianne Legendre is a mother helping her young offspring to learn how to cross the road by looking both sides first. Unfortunately children learn by example, and Cosmo Mama’s demonstration here is quite catastrophic.

5. ‘Pay attention with love’ manages to trip up on confusing verb tenses, but its message of peaceful vigilance remains as sharp and clear as its razor-like guitar solos.

6. For ‘Nada dinero al banco (where did the money go ?)’, Lunasam has two guest vocalists: first Venezuelan President Hugo Chavez, along with an anonymous conspirator of the Illuminati, a conspiratorial organization which acts as a shadowy power behind the throne, controlling world affairs through present day governments and corporations in order to bring about the New World Order. Partisans of both sides happily shout slogans.

7. ‘Boucane sur le fleuve’ is a French-Canadian adaptation of Deep Purple’s classic ‘Smoke on the water’, where the body of water referred to is now the St-Lawrence River (Fleuve St-Laurent) with the song recounting the sinking of a ferry between Matane and Godbout: the wildly inspired guitar and keyboard solo section of this track is one of the highlights of the CD.

8. ‘Butterfly’ by Robert is a piece that was originally written for children. Biomechanical perfection, butterfly effects and summer loving: Sabrina partners here to provide vocals and to add that pastoral touch.

9. ‘Méphistophélès dit non’ (Mephistopheles says no) where Denis, affecting an old time Italian crooner charm, embodies Mephisto himself, constantly complaining about the blinding light of reason, lamenting that it was much better back in the time when beings were not born yet. Creation is just not his bag.

10. ‘Dark’ -- Under a soft and moist earth, shielded from dawn, the Darker brothers do not fear the sun as their caskets are opaque.

11. Who would blame a landlord (‘Propriétaire’) from keeping his nose to the grindstone and his eye on the bottom line? Only an annoying and unworthy tenant, that’s who. Denis does a lap steel guitar solo to peel paint off the walls and unclog a toilet in the middle of this a 180 beat per second dash.

13. ‘Rrose Sélavy’ was in fact French surrealist artist Marcel Duchamp who wandered the streets of Paris in an elegant evening gown, back in the age of oranges. A poem by Robert Desnos…

14. ‘Moonshine’ for ‘Moonshine of your blood’, is another Cream cover by Count Downe, this one of ‘Sunshine of your love’. The wolves howl along with Elsa as the Count suavely seduces his beloved. Their love will be enjoyed to the last drop.

15. ‘Raven’s way’: beyond Alfred Hitchcock or Edgar Allan Poe’s wildest imaginings, here intelligent birds are allowed by the government immigration board to invade us, stealing our jobs and our women. The ravens, living off profits we unwittingly helped them acquire, buy eveything in sight, including big oil companies. Are we the road-kill on the side of the road to progress?

16. The last moments before that long-promised tunnel of light is the theme of ‘Théâtre de la fin d’une vie’ (End-of-life theater), a one-act play. Denis interprets all the roles over music by Robert, including all the voices in the Greek chorus.

17. Elsa sings a text by Benjamin Péret from the 1920s, ‘Odeurs de l’amour’ (Odors of Love), explaining that wild passion is held together by mere strings and must be consummated before the sun explodes like a ripe fruit.

download other free tracks from the band here: http://lunasam.com/wav/

buy the other tracks on their album here: http://lunasam.com/