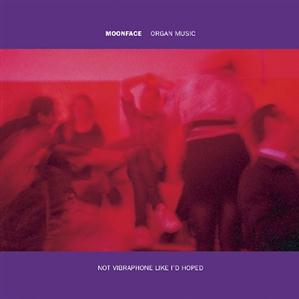 Moonface is not a band. It is at least the seventh musical project Spencer Krug has been creatively involved with since 2001, and apart from Camilla Wynne Ingr’s backing vocals on one track, he is the sole contributor. However, Moonface also is not Spencer Krug. It is a conduit for the becomings of Spencer Krug, a vessel for his dissolution—an attempt at new life, and a performative acknowledgement of the necessity of death. “I’ve got a spirit made out of sand / Sometimes it slips through my fingers / Back onto the beach,” we’re told at the outset of Organ Music Not Vibraphone Like I’d Hoped, and there is a mortal struggle at the heart of this LP between Krug’s impulses to “kneel down and gather [his spirit] up, grain by grain” and to let it disperse in search of the primordial ocean floor and the violence that breeds new life. Krug has always been concerned with the reciprocity of creation and destruction: “All fires have to burn alive to live,” as he’s told us on more than one occasion, and the brighter the flame, the faster the burn-out. But never before has he so openly looked into the darkness that falls when the flame is pinched out. “Like a candle that is held up to a mirror,” Krug seeks on this album to know himself better in the face of this looming darkness, and in doing so, to come to terms with his own mortality in a world where “everything is fleeting, baby.”

Krug’s concern with vitality and decay is evident not just in his lyrics, but in the very nature of the Moonface project. As I argued in my review of “Fast Peter,” the exhilarating centerpiece of Organ Music, Moonface allows Krug to liberate himself from the burden of artistic creation by relinquishing a degree of control over the direction and tone of his music to the instruments of its realization. Little did I know that the paradox this implies would be so directly confronted by Krug himself on Organ Music, as this couplet from “Loose Heart = Loose Plan” shows: “He said ‘Come on, let’s kill individual will’ / Oh I will, I will, oh I really really will.” With Moonface, Krug is able to sidestep the apparent aporia formed by willing not to will by decentering the volitional agent—which is to say, himself.

Krug has always taken on other identities and perspectives in his music, expressing facets of his self through animals, mythical figures, ghosts, et al. He continues to do so here. But Moonface goes beyond these imaginative transformations and finds the songwriter himself stepping into the shadows. Like the clay statue in “Shit-Hawk in the Snow” who “gives up its details to the dusk,” Krug is moonlighting here in order to duck the frontman status he assumed in Wolf Parade and Sunset Rubdown without leaving the stage altogether. More precisely, Krug didn’t form Moonface as a solo project in order to monopolize creative control over his music, but rather as a means to strike the spark of novelty without the baggage that comes with being in a high-profile band like Wolf Parade. As he expresses it in a press release: “I have always loved the burst of creativity that happens when projects come together for the first time—the first song written, the first recording, or the first show. I love the process. With Moonface I hope to recreate that excitement repeatedly, with an ongoing series of collaborations which will tour and record like any other band, but which have set and finite life spans.”

For an artist of Krug’s stature, opting to focus on this kind of project to the exclusion of a band like Wolf Parade is kind of extraordinary, and shows a keen insight on his part into the vicissitudes of the music industry. Countless are the instances in popular music of a songwriter setting the world on fire with their band’s debut album, and then slowly, over the course of three or four albums, losing creative steam and ending up a pale imitation of their former self. When Wolf Parade’s lackluster Expo 86 was released last year, it seemed that Krug was headed down the same path. That record felt, as Mark contended, less like a step forward for the band and more like “a holding pattern for a set of musical ideas” that were better and more interestingly expressed on Wolf Parade’s excellent first two LPs. Without speculating too much about the reasons behind Wolf Parade’s indefinite dissolution, it seems reasonable to think that Krug himself may have also felt the need for a new creative outlet that would not require him to stick to any one artistic template. The Moonface project can thus be seen as Krug’s protean attempt to maintain artistic vitality and keep himself out of the well-populated graveyard of creatively exhausted indie rockers.

The performative dichotomy at work here—the real-life conflict between creative stagnation and progress—is mirrored by Krug’s explorations of death and rebirth on Organ Music. To some extent, the parallel between artistic relevance and mortality as such was already explored on Sunset Rubdown’s Dragonslayer (2009), where musings on musical longevity were juxtaposed, on songs like “Silver Moons” and “Apollo and the Buffalo and Anna-Anna-Anna-Oh,” with laments about aging and growing irrelevant. On Organ Music, however, where Krug most openly faces his own demise, fear of obsolescence is replaced by a fear of recognition and the expectations that come with it. Krug scolds himself, “You should have been a writer / You should have played guitar / And the kids keep coming down the fucking hill,” as if it’s all he can do to ward off the droves of fans he’s earned over the years. This attitude is entirely consonant with Krug’s manifest desire to step out of the spotlight and into the shadows; the more we canonize him, the more we expect a repeat of Apologies to Queen Mary (2005) or some other past highlight, the less can Krug pursue his quest for the new and unwritten. We are the carrion birds here, the scavengers sifting through his ashes looking for secondhand treasures undamaged by the fire. Or, to use Krug’s own metaphor from “Whale Song (Song Instead of a Kiss)”: “And I could see you’ve made a garden / From the flowers growing out of my remains / And I would say it’s not the way I would have had them / But I will also say it works just the same.”

Given this marked ambivalence toward his work’s reception, it is unsurprising that Organ Music is, musically speaking, easily Krug’s least accessible work since the first Sunset Rubdown LP. Setting aside the antiquated instrumentation and somber tone, the sheer length of the album’s five tracks—all fall within the 6:30-8:15 range—will likely be enough to dissuade most casual listeners. But give this album a few listens, and verily, it will hypnotize you. As always, Krug knows the strengths of his chosen instrument, and each song is built on a foundation of lush, swelling drones and overlaid with entrancing melodic lines and bubbling arpeggios. Krug sometimes improvises for long stretches, as on the second half of “Fast Peter,” but for the most part the beauty in these pieces comes from the way they slowly, purposefully unfold. The end result is a sound that feels both modern and ancient: the glorious sequence of arpeggios that rounds out “Return to the Violence of the Ocean Floor,” for example, owes as much to Baroque counterpoint as to progressive rock or synth-pop. And yet, throughout the course of the album, these influences are melded seamlessly into a sound that is unmistakably Krug’s own: dour, wistful, and tragic. It’s the pall of which Dom spoke in his Dreamland (2010) review, given shape and weight and woven into a shroud blacker than the night.

And wrapped up somewhere inside that shroud is Spencer Krug, his features obscure in the dim light but not yet invisible. No matter how many levels of remove he puts between himself and his listeners, what ultimately grounds every second of his music is the candid, deeply human, idiot heart of the man himself. It is the need to preserve this humanity at the core of his craft which drives Krug to ever-new platforms of expression; conversely, it is the deepest tragedy of his craft that it will never be fully adequate to that humanity. “This is a song,” Krug acknowledges on this record, “instead of a kiss.” And so an album that confronts death ends, as it must, in resignation: “So I did a little dance in the hospital lobby / Singing leave the revolution to the revolutionaries.” In this final light, Organ Music reveals itself to be an attempt, not to cheat or deny death, but rather to acknowledge it as the ineluctable destiny of the new—and further, to embrace it as the condition of the possibility of creation. All fires, as we know, have to burn alive to live. We may as well bask in the flames
-Brent Ables