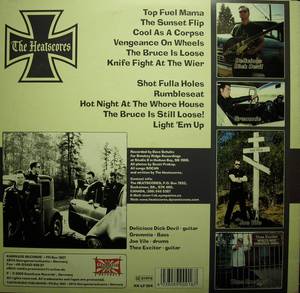 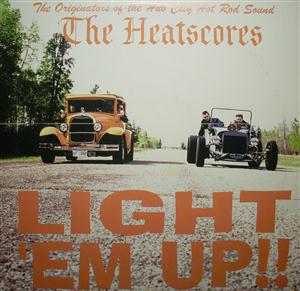 In the late ‘90s and early Oh-Ohs, The Heatscores were the answer when it came to Saskatoon’s premier hard-rocking, instrumental surf-punk band. Billing themselves as the “Originators of the Hub City Hot Rod Sound,” The Heatscores quickly gained a local cult following for both their intense songs and incendiary live show. Put simply, when it came to surf ‘n’ roll, they were the best game in town.

Now, they’re back — and while the promise of even a one-off show is likely to send former fans into a frenzy, at least one member thinks there might be even more to come.

“For the first time in years, we all live in the same city again,” says guitarist Delicious Dick Devil (aka Rich Belheumer). “Gremmie, our bass player, had been in Calgary sewing his wild oats, and we just couldn’t do it without him, [but] we got together for beers and started talking about old times — and next thing you know, we’re awash in reverb and pale ale.

“While I don’t know what the future holds as far as making new records, I think it’s safe to say this won’t be a one-time thing,” says Devil. “It’s just too much fun!”

Various members of The Heatscores certainly continued to make their mark on Saskatoon’s scene after the band’s breakup — creating bands like Savage Henry and the Infamous One Pounders, The New Jacobin Club, Sleaze Patrol and Bewarewolf, in addition to local label 100% Wild Records.

Still, there was something special about The Heatscores — and even people in Germany knew it.

“We had a 10" record released in Germany by a label called Kamikaze,” says Devil. “We were close to doing a tour there, but it just never happened — mainly due to lack of funds. But having foreigners put out a record of your band and seeing articles about it in a magazine you can’t read is pretty interesting.

“Although I’ve never been to Germany I assume we’re still huge over there.”

In addition to the vinyl 10" (which is long out of print and can presumably only be acquired for a princely sum via eBay), The Heatscores also released a cassette entitled Ruin Christmas and a CD called Light ‘Em Up. All of their releases captured a reverb-drenched sound that stomped and spat with an appropriate punk energy, with plenty of nods to the likes of Dick Dale, The Mummies and The Golden Tones.

Fans will also be interested to know that they’ve got a lot more songs than they’ve ever released — and now that they’re back in the swing of things, Devil is hopeful those tunes might actually see the light of day.

“I can’t say right now if we’ll make new recordings, but when we split up in 2002, we had an album’s worth of songs that ended up never getting recorded,” he says. “Things have changed dramatically in recording technology since then, and I personally would like to give it a whirl. Time will tell.”