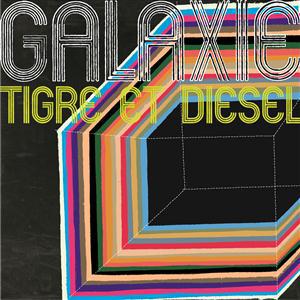 Anyone who finds Malajube too odd, who finds Karkwa too bland, or in general has yet to hear any francophone Quebecois music that kicks their ass, then this record by Galaxie should not be so far, far away.

If Gordie Johnson of Big Sugar wrote songs with Beck for Black Mountain to perform with Stereolab—in French, no less—then you’d have the third album by this Quebecois band (who unfortunately used to have “500” affixed to their name, causing much confusion with the influential cult band Galaxie 500). Fuzzy, somewhat blusey guitar riffs are given a lo-fi glam treatment with fluttering synthesizers in the background, all of which demands to be played at maximum volume, ideally with a bottle of Maudite in hand.

Galaxie love their ’70s sounds, but don’t get lost in retro reverence. Olivier Langevin is the rare guitarist who noodles effectively, and his band, which includes acclaimed solo artist Fred Fortin on bass and two members each on female vocals and keyboards (not all the equipment are 30 years old—there are some definite modern electro moments here) sound massive with merely the simplest arrangements. Unlike most franco rock bands, there’s nothing clunky about the cadence here; Langevin knows how to write a hook in the universal language. And on “Jusqu’a la fin,” he writes a perfect cliché acoustic ballad that hits all the right chords, readymade for campfires and high school slow dances everywhere.

Other Quebecois bands will get more hype in the anglo press, but this is the one that the rest of Canada—especially our rock radio stations—really needs to hear.
-radiofreecanuckistan