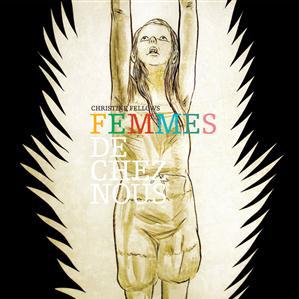 The Winnipeg building now known as La Musée St. Boniface Museum, has been a convent, hospital, orphanage, old folks’ home and (since 1967) repository of Manitoba history. Louis Riel went to school there. Christine Fellows spent six months in residence at the museum in 2009, doing history as only a songwriter can. The result is this bilingual double album of songs that dip into time as into a flowing river that can’t be separated into what is past and what is yet to come.

Fellows’s poetic songs for piano and strings are homey, prize endurance, and are inclined to draw things together, no matter how disparate they may seem. The outlook is condensed into a single line in Certainty: “We’re one rough, seamless cloth bunched together at the knees.” In Mile 137, she thumbs through snapshots of prairie life, pausing in her description of field and flora to note that “the wind calls in your mother’s voice.”

Her tunes are often like country dances made lyrical, and like folk bards she sometimes follows the rhythm of words into a time not easily measured. Leap Year feels extemporary from beginning to end, with a fine inspiring chorus (“Courage, enfants, courage!”) that recalls the vanished orphans of St. Boniface. (W)horoscope, her best melody, moves along in 5/4 time, as Fellows outlines the career of a changeling spirit with “years of excess and reserve written in stone.”

Un Canadien Errant gives gently rollicking voice to homesickness, here represented in sepia tones and vocal harmonies that make this sound like the tune Fellows never got to record with the McGarrigles. Reversed Arrow surveys the open land of buffalo and long grasses, with an echo of Riel’s complaints and a folkish drone in the cello. Femmes de Chez Nous makes an imaginary inventory of a household of women who could be St. Boniface’s Grey Nuns, except that they have names like Clara and Rosalie. History in school was never so colourful or poignant.

There are a few songs with grainier accompaniments, including the poppy Antipodes, a guitar- and organ-backed song about the world from a bat’s perspective (or rather, about oneself as a bat-like outsider); and Mlle. Sténo, a song with drums and guitar about a working girl from the age of Pitman’s shorthand. Dragonfly runs a thrumming beat on marimba beneath a series of images of contentedness and abandonment.

Fellows’s sans-serif voice has a direct, natural sound that suits the questing nature of her songs. She’s not afraid, as a songwriter, to lead it through unusual melodic shapes, though she’s also quite capable (in Mlle. Sténo, for example) of resorting to a stingy ditto-tune style of tune manufacture.

Through it all, she persistently advances the idea that a careful sideways look at life’s realities may be the most revealing. In her work, the feeling of things and situations is mainly to be found in their description, as in old Japanese poetry.

This beautifully recorded CD comes with a DVD of Reliquary/Reliquaire, a multimedia performance Fellows did in the chapel at St. Boniface, with historic film footage and live projected imagery by the remarkable visual artist Shary Boyle, whose drawings also appear on the handsome booklet.