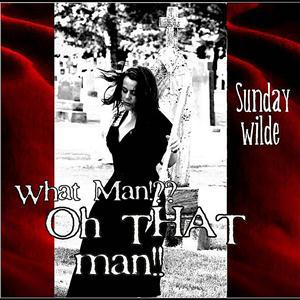 Fresh from the excitement of being nominated for Best Acoustic Album of the Year in Germany (Wasser Prawda), Sunday is excited to announce her latest album, released early this year, What man!? Oh THAT man!! featuring upright rockabilly Hall of Famer Ronnie Hayward and international guitarist David West, has just won BEST International Release of the Year on blues411.com. The album has been playing worldwide on roots and blues stations all year!!

Sunday Wilde’s newest CD is a soulful mix of tormented love, no good men and strong women that survive. A heady concoction of new meets old, Wildes own unique voice mixes sweet innocence with a dusky raspy edge that conjures up images of early Ethel Waters and Sister Rosetta Tharpe. The opening song “That man drives me mad” is a hard driving honkey tonk tune while Sundays Midnight Blues invokes the quintessential metaphor of the dank ,smoke filled bar, last call and a lone piano player while Sunday sings to a friendless room. Time to say Goodbye rounds out this collection with a lilting expressive ballad complemented by David West’s classical guitar accompaniment and Ronnie Howard on Bass.
Barry, American Blues Blog

She is a powerful and intense vocalist, a rare voice that speaks from the primal soul. Sunday is a songwriter who explores the subjects of grief, addiction, love and the torment of social and family dysfunction. Her lyrics and delivery make it abundantly clear that she speaks from experience and authority.