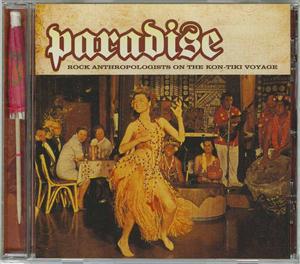 Canadian metal enthusiasts should at least be aware of this disc's existence, due to the guest appearances of Mike Plant of Sword fame and Away from Voivod pounding the skins throughout the entire album. But what the hell is Paradise? Some sort of independently released Polynesian pop art worship stoner rock, methinks, but once past the completely confusing and pretty great artwork you'll find straight-up hard-hitting rock’n’roll. Pretty MeteorCity-ish if anything, Paradise trash their way through nine songs in about half an hour on this brilliantly-titled disc. A nice beefy production and an ability to write adequate rock’n’roll make Paradise an enjoyable listen.
-Greg Pratt

This young Canadian band was formed in 2002 and there are two outstanding things about PARADISE. First off, they combine Polynesian pop art with some sort of heavy sleazy metallic Rock 'n' Roll and the second thing is, that Michel "Away" Langevin, skinsman of the mighty Voivod is playing drums on the complete album. Hm, I've got no clue about Polynesian pop art, but the cover-artwork looks very nice and is definitley not typical for this kind of Hardrock. The promo info says, that PARADISE gained the status of one of the most spectacular striking live acts around. Maybe the have nude female Polynesian dancers on stage, because the sound is good and it rocks.

The album includes nine catchy songs, and especially the last four tracks are my personal faves of this album. It seems to me, as if this guys need a bit of tim, as in the first half of the album, but when their machine is rolling, it's nearly unstoppable. If you looking for a heavy rockin' and rollin' album, that's comparable with stuff as Michael Monroe (ex-Hanoi Rocks, Demolition 23, etc.) and other sleazy stuff than check out PARADISE. The only low point of this album is the whole playing time, that is only about 27 minutes. Not enough value for money!

The CD is out of print and rare. Available only as a digital download at mocm.ca.