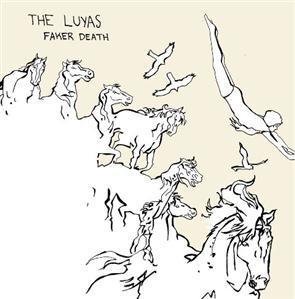 While sparse and delicate at times, Faker Death, is equally chaotic and mesmerizing at others. Already turning heads due to the inclusion of a member of Miracle Fortress in their lineup, with their debut the Luyas are well on their way to acclaim all their own.

In TONEAudio Magazine’s Issue 16, I interviewed Secret City Record’s Andrew Rose. He recommended a few local artists to check out as well as a fantastic little record store, called Phonopolis, right on Parc Avenue in Montreal’s Mile End district. No surprise Andrew recommended The Luyas after hearing how much I enjoyed Miracle Fortress. Jessie Stein, the lead singer of The Luyas is a guitarist and backup vocalist in Miracle Fortress.

The tracks have the kind of dramatic scale and orchestration you would find in an Eric Matthews album. Jessie’s soft vocals quivering to start, find some force behind bold brass and pounding drums performed by the rest of the trio, Pietro Amato and Stefan Schneider of local Montreal outfit, Bell Orchestre. Pietro is also former alum of Arcade Fire’s horn section.

Raw freshly strung and strummed electric guitar is driven by powerful semi-spastic drumming and accentuated by startling horn blasts and swells. The poetic lyrics are dark and painful, yet Jessie sings less with desperation and more with hope.

Faker Death is a beautifully ambient recording that throws the sound stage all over the room. It can get a little spooky as sounds come expectantly from in front, to spooky whispering just besides your ears.

If you like the quiet vocals and unique arrangements of the band Ida and are familiar with the similar yet slightly stronger songs of the band Tsunami, you will love Faker Death by The Luyas. The arrangements on Faker Death are just a tad less stark than the average Ida track while the energy slots somewhere between the melancholy vibe of Ida and the more frantic vibe of Tsunami.

This is a hard to find album by a small Montreal trio that is completely worth checking out… I’m glad I took the blind chance on Andrew’s recommendation.