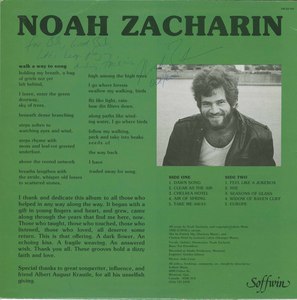 Noah Zacharin was born in Montreal and resides in Toronto. He was given his first guitar at age 9, wrote his first song at 13, began performing at 14, and is happy to say that he still loves playing music. He has been called "a wonderful songwriter and performer, and stunning guitarist" (Paul Mills, Borealis Records, Producer (Stan Rogers, Oscar Peterson), a "wonderful, adventurous guitarist" (Blues Bytes), "a poet, a songwriter, a singer we have been waiting for" (Penny Lang), "a great guitarist/singer/songwriter...a wonderfully musical player" (Randy Finney, President and Founder Toronto Fingerstyle Guitarist's Association), "in a league of his own" (Brian Gladstone, AD Winterfolk Festival), "one of the best songwriters this country has produced" (the late great Rick Fielding, recording artist, radio host) and "deserving to be mentioned in the same breath with names such as James Taylor and David Wilcox" (Minor 7th).

Noah Zacharin's recently released 6th CD, "Waiting on Your Love", continues his tradition of literate well-crafted songs, while marking a significant departure in production. Heavy on horns and Hammond, Zacharin has enlisted the best of Toronto's pop and jazz players, as well as long-time Tom Waits alum Ralph Carney, to create a recording of richness and variety. Where previous CD's have essentially been solo recordings (though often utilizing Zacharin's own overdubbed guitars, bass, voice, etc.), on "Waiting", instruments from tin whistle to tuba add just the right touch as Zacharin makes his trademark leap between blues and jazz, folk and country, bluesgrass and pop. In a feature article, The Globe and Mail reported that the disc "wrests an improbable sense of order from a chaos of genres...built around his usual and unusual acoustic guitar style and literate lyrics." Since release it has received national airplay on the CBC and its French partner Radio-Canada, and early reviews have said: "Highly recommended": Kerry Doole, Tandem Online; "One of the best singer/songwriter CD's I have ever heard": Randy Finney, TFGA newsletter; "The heart of a poet, the mind of a lyricist, the skill of a composer, the fingers of a musician...": Minor 7th.

Much sought after as a guitarist, he has recorded and performed with some of Canada's finest writers, including Penny Lang, Bruce Murdoch (with whom he has also co-written), Lucien Francoeur, Rick Fielding, Danny Marks, etc. As a soloist he has opened shows for the likes of Odetta, David Lindley, Dave Van Ronk, Jesse Winchester, Alex de Grassi, and Fairport Convention. He has twice been runner-up in the OCFF Songs From the Heart Contest, and has consistently short-listed in the competition.

Zacharin is also a popular radio and open stage host, and a prize-winning poet (with "a remarkable ability to articulate efficient, powerfully condensed ideas": What 18/19). He has published hundreds of poems, translations, and reviews in periodicals and anthologies worldwide, and is currently at work on two volumes of poetry and several children's books.