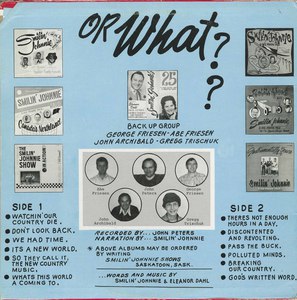 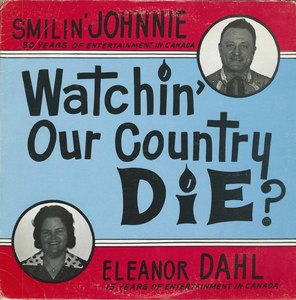 Smilin' Johnie, joined here by his wife Eleanor Dahl singing the blues to country music through 40 years covering topics such as the depression, second world war, poverty, the moral decay in music, and perhaps the eventual collapse and degradation of Canadian society alltogether in the 1970's?

LUCKY - 'Smilin Johnnie' 1924 - 2010. Mr. John Lucky, was born September 2nd, 1924 at his families farm, located 8 miles north of Wroxton, Saskatchewan. A shy child who was always interested in music, he attended Brandon school, 2 miles from home, where that interest was nurtured by one teacher in particular, Fred Tetoff. Mr. Tetoff invited him to be a part of his dance band. Friends encouraged him to audition for a program on CJGX radio not long after the station started in Yorkton, and he was given an early morning show there. Some young fellows from St. Joseph's College asked him to lend them his sound system and drive them to their dance dates, the band eventually became Smilin' Johnnie and his Prairie Pals in 1946. The group worked out of CJGX for a time, then went further affield playing throughout Canada. After moving from Yorkton, Johnnie lived for a few years in Swift Current, Regina, North Battleford, and Saskatoon. Over the years, he found dances weren't as popular as they once were, so he began playing concerts. Those concerts and Johnnie's unique spirit of adventure found him becoming the first entertainer to take shows north of the Arctic Circle in 1963. The initial tour brought requests from other communities till the Smilin' Johnnie Show had played every community of any size in Northern Canada from west to east. In 1975, Johnnie married Eleanor Dahl and a year later they moved back to the family farm to be close to his parents who were aging. The years spent on the "farm" brought him much happiness, and to share the enjoyment of the place, he held Jamboree's there from 1988 till 1999. He still toured and entertained, and he ALWAYS kept planning for the future. In the fall of 2009 he got promotion ready, and was planning to tour with his grandson, Zachary-that plan was cut short by a stroke on November 5th, from which he never recovered.