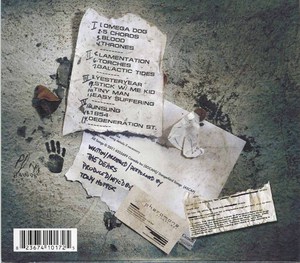 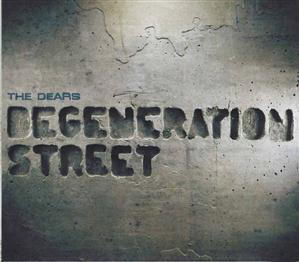 It hasn’t been a particularly easy half-decade for Montreal collective the Dears. When they dropped the highly acclaimed No Cities Left back in 2003, there was little reason to think they wouldn’t soon be playing the same arenas as Arcade Fire, their neighbors and fellow architects of grandiose pop. Instead, the band disintegrated in cloud of internal conflict and ever-diminishing returns. Pared down to the married duo of Murray Lightburn and Natalia Yanchak, the band released the insular, grumpy Missiles toward the end of 2008 and set out on a tour that looked like a fairly joyless experience, judging by a band-shot tour documentary. Missiles certainly sounded like it was created with the inevitable death of the band in mind, yet there were hints throughout that Lightburn was just trying to shake off some bad juju. After all, the mantra that is repeated through the album’s 11-minute closer is “I’ll make it right…next time”.

On Degeneration Street, the band’s miraculous new album, Lightburn makes it all kinds of right. Not only have the Dears been reborn creatively; they’ve become an actual band again. Cobbling together a greatest hits lineup of assorted players from the band’s 15-year history (none more valuable than versatile guitarist Patrick Krief), the new-look Dears spit fire and brimstone all over Lightburn’s strongest batch of songs to date. Keen to bottle the excitement of their resurrection, the band cruises with the needle pegged, making for an occasionally overwhelming listening experience. Although there are no easy throughlines or unifying themes (unless recurring harpsichord solos count), Degeneration Street plays like a distant cousin to Arcade Fire’s similarly overlong The Suburbs. Only, in this snowbound neighborhood, the disaffected youth have grown into god-fearing adults who party in their basements while they wait for the coming apocalypse.

The Dears of 2011 largely abandon the ambient segueways and meandering outros that bogged down their previous album and stick to a slightly more conventional verse/chorus/spazz-out structure. Things open on familiar territory with the dramatic slowburner “Omega Dog”. While the band’s trademark waves of synthy noise envelop us, Lightburn’s falsetto collides with a slinky bassline to produce something sultry. Eager to make a good second impression, the new players stretch out immediately, taking extended solos that always fall just shy of overplaying. Once the propulsive “5 Chords” springs to life, it becomes obvious that the order of the day is concise, spacey power pop. The majority of the arrangements here favor the direct attack, with enormous, hooky choruses dispensed of as quickly as possible. A few years back, the listlessly noisy “Thrones” would’ve lumbered off to nowhere in particular. Here Lightburn, his velvety croon switching effortlessly to demons-be-gone howl, turns the track into an infectious scream-along. With his chameleon-like guitar playing, Krief assumes the role of co-frontman. He alternately channels Jonny Greenwood, Peter Buck, and Eric Clapton (often during the same song) and somehow possesses the ability to make the bone-headed altrerna-rock riffs of “Blood” sound revolutionary.

Much of the album’s success can be attributed to the band’s decision to work with producer Tony Hoffer (Beck, Phoenix). Like an indie rock Rick Rubin, Hoffer keeps things fluid, letting the mood of the material dictate how the final product is going to sound. Despite his band’s new lease on life and a heavy dose of can’t-stop-us-now proclamations like “We will surrender at the sight of frozen hell”, Lightburn remains a pretty moody guy. Like Greg Dulli’s long lost Gutter Twin (minus the illicit sex), Lightburn is an artist who will always need to spend time on the dark side of the street. “Lamentations” and “Galactic Tides” form a gloomy mini-suite that nearly suspends the album’s upward momentum at the halfway mark. Linked by scorching guitar solos, possessed vocals, and a wailing female choir lifted straight out of Dark Side of the Moon, these tracks flirt with the sort of operatic melodrama you’d expect from a band like Muse. Not even a commanding vocalist like Lightburn can get away with screaming “Galactic tides will end our lives!”

Fortunately, Lightburn has a solid gang on hand to save him from throwing himself into the abyss. Leading off with the Strokes-y “Yesteryear”, the back half of the album continues the onslaught of exuberant doomsday pop. Yanchak finally gets some face time on the jangly, unabashedly romantic “Easy Suffering” and the In Rainbows-era Radiohead knock off “Unsung”. “Tiny Man” rolls forth with some effortless swagger while the dark new wave of “Stick w/ Me Kid” is a true highlight among very strong material. The surging epic “1854”, with its slash and burn guitars, horn stabs, and defiantly optimistic lyrics, would seem like the perfect way to sum up everything that came before it. Instead, we have the funereal title track to play us out. The band channels Black Heart Procession while Lightburn moans, “I heard there’s no rest for the wicked / So I won’t be sleeping when I’m dead.” Given all of the pure sugar highs we’ve been treated to throughout the album’s hour-long running time, we’re content to let Lightburn have his final moment in the dark.

Although Degeneration Street occasionally veers off course, the fact that it exists in the first place is cause for celebration. Not only have the Dears fallen back in love with making music, they’ve expanded their palate in exciting and unexpected ways. If this album is proof of anything, it’s that the Dears once again have a long career ahead of them.